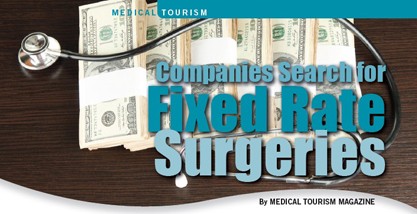 Last year it was PepsiCo. and Johns Hopkins, prior to that it was the Cleveland Clinic and Lowe’s and now more and more companies are catching on to the trend of making deals with hospitals for bundled payments on surgeries. Domestic medical tourism is growing.  Recently it was Wal-Mart Stores Inc., what major company will be next?

These bundled deals really seem like a win win for everyone. The employer may save some money and have a healthier employee, the employee will get better quality care and often times cash incentives and the selected hospital will get a larger influx of patients.
‍

The way this works is that employers and hospitals come to an agreement where employees and their family members can travel to that specific hospital and have selected surgeries. The hospitals agree to a bundled payment for the procedure or fixed rate surgeries, this would include the surgery, doctors, labs and any other cost related to the surgery.

The hospitals usually specialize in the procedures they agree to offer so the employee will receive excellent care enabling them to return to work faster. This process is saving the employer money so in most cases they are willing to pay for all travel expenses.
‍

A recent article in the LA Times gave a few examples of this happening across the United States.
‍

Newspaper publisher Stephens Media sends employees and family members needing hip and knee replacements to a few different hospitals in the U.S., including one in Orange County that agreed to fixed rate surgeries. In one case, the employer paid for all the expenses for the patient and a companion, which included giving them $1,000 in spending money.
‍

A major grocery store, Kroger Co. made an agreement with Hoag Orthopedic Institute and several other hospitals for hip, knee or spinal-fusion surgeries, this agreement will save the employer money and give the employees a better quality of care.

At Kroger, employees may pay 10 percent out of pocket if they choose one of the company’s 19 selected hospitals, compared to 25 percent to 50 percent out of pocket for other nearby medical centers. Kroger Co. pays around $30,000 for the hip and knee replacements, that’s 15 percent less than what they would pay without an agreementii.
‍

It was also mentioned in the article that Medicare and some Medicaid programs are trying to negotiate all-inclusive prices for things like maternity care for low-income mothers and other common procedures in hopes of eliminating some problems in U.S. healthcare costs.
‍

Wal-Mart recently signed a deal with six hospitals; starting in January 2013, they will cover cardiac and spinal surgeries for more than one million U.S. employees and their families. They will get access to consultations and care for certain cardiac and spine procedures at no additional cost and Wal-Mart will cover all travel expenses for the patient and one companion. Through this bundled payment arrangement, they are expecting to reduce their healthcare costs. The six hospitals participating in this agreement includeiii:

Perhaps this idea will be the start of something major, as mentioned above Medicare and Medicaid programs are already taking a look at this. If this was expanded beyond specialty surgeries, could this be one way to deal with the rising costs of U.S. healthcare.