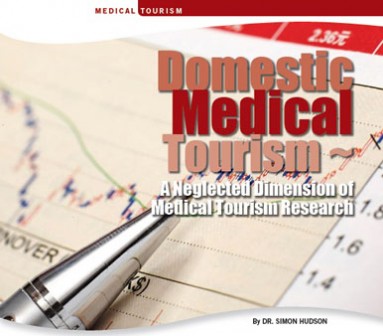 PREPARING FOR THE CHALLENGE

Considerable hospital revenue is being lost to U.S. hospitals from patients traveling overseas. Deloitte Center for Health Solutions estimated that the U.S. lost $15.9 billion in domestic consumer spending to medical tourism in 2008, and this would rise to $68 billion in 2010. However, in recent years, a number of medical tourism experts have suggested that competition introduced from abroad may stimulate improvement in health care offerings at home, and lead to an increase in domestic medical tourism.

Some hospitals in the U.S. are offering discounted bundled care for particular procedures in order to compete with overseas medical providers. Galichia Heart Hospital in Wichita, Kansas, for example, decided that it could break into a market monopolized by overseas hospitals, and offer high-quality more-convenient care to patients. After conducting medical tourism research in other countries, the hospital decided to challenge itself to see if it could offer comparable prices on heart procedures and other services.

By cutting prices, the hospital found it was attracting an additional two medical tourism cases a week, or approximately 100 a year, which generates $1million in incremental revenue per year.

‍
Other states in the U.S. are promoting domestic medical travel. Oklahoma is positioning itself as the medical tourism destination for oncology care in the U.S., and Missouri is seeking to attract medical tourists from neighboring states for both intervention and intervention-type treatments.

Missouri’s Hospital Association recently commissioned a study into domestic medical travel, suggesting that it created over 3,000 jobs and generated $124 million in non-medical travel expenditures in 2009. The report suggests that the tourism industry should work with the healthcare community to inform potential patients about the opportunities Missouri offers in the state’s largest cities – St. Louis, Kansas City and Springfield.
‍

In 2010 the home improvement retailer Lowe’s struck a deal with Cleveland Clinic making its cardiac care available to employees. This is the first time that a national company has selected one specialist hospital. The incentive for employees is that they incur lower out-of-pocket expenses for heart procedures at the clinic.
‍

Another reason for the potential growth of domestic medical tourism is the aging population and the baby boomer cohort in particular. With life-expectancy over 80, there will be 115 million people 50 or older in the U.S. by 2020, 50 percent more than now. Seventy-six million of them will be baby boomers, those born between 1946 and 1964.

Boomers control more than 83 percent of consumer spending and account for over half of trips abroad. Boomers are making healthy aging both a priority and the norm, as they wish to remain productive and useful, stressing both physical and mental health. These priorities are leading to an increase in medical tourism. Health and wellness centers are expanding all over the world, and spa tourism is seeing significant growth; spa tourism is worth over $255 billion globally.

‍
Fried and Harris (2007) indicate that hospital leaders in the U.S. can take several steps to meet the challenge of competition from medical tourism overseas. The first is to demonstrate that the quality of services is worth the extra cost. Second, managers must reduce costs and improve the efficiency of operations.

Third, U.S. hospitals could take concrete steps to improve their patients’ privacy as well as the perception of receiving more personalized care. Finally, they suggest that U.S. hospitals should emphasize that patients treated in many foreign countries have limited legal remedies in the event of an adverse outcome caused by medical malpractice.
‍

As seen by a few examples above, some individual hospitals and regions in the U.S. are beginning to position themselves as medical tourism destinations, but few stakeholders have recognized the opportunities in bridging the gap between hotels and healthcare. In order to match the two sectors and develop strategies for a thriving medical tourism industry, research is required.

We have built on previous frameworks and models to provide a new model of medical tourism to guide future research, one that depicts not only the demand and supply perspectives, and the intermediaries that bridge them, but also the growing trend towards the provision of an integrated medical tourism facility, a hybrid institutional form that incorporates features of both a hospital and a hotel (see Figure 1).

Recognizing this overlap or relationship between medical and tourism stakeholders makes this model unique, as does the acknowledgment that medical tourists can be both domestic and international.
‍

The left-hand side of the model is dedicated to the medical tourists themselves, influenced, according to the literature, by affordability, availability, the opportunity to vacation, privacy and anonymity, advanced technologies, better quality care and quicker access to medical procedures. These medical tourists will in turn be influenced by source market externalities such as the state of the economy and political system in their country, and their current health system.

Although some medical tourists may seek medical tourism providers via direct channels, the importance of intermediaries has already been acknowledged, so the middle part of the model shows the various channels a customer might use to arrange his or her medical tourism experience.

One such channel is the “medical brokerage”, “medical tourism facilitators” or a “medical travel agency”, intermediaries that have emerged to bridge the gap between clients and medical tourism providers.

Traditional travel agents might also fulfill this role, while some researchers have suggested that medical tourism growth has been largely facilitated by the emergence of specialized internet websites. Others have documented the importance of employers and insurance companies in fuelling the growth in medical tourism. All these channels are represented in the model.
‍

Finally, the right-hand side of the model depicts the supply side of medical tourism – a combination of hotels and resorts and the medical tourism facilities themselves, providing the three types of treatment as identified by Bookman and Bookman (2007) in their book on medical tourism – invasive, diagnostic and lifestyle treatments.

The shaded area of the model is the “Hotels to Healthcare” (H2H) part of medical tourism, an overlap between hotels and resorts and the medical facilities themselves, often resulting in the provision of an integrated medical tourism facility. An increasing number of hospitals and health resorts that are geared towards medical tourism are building rooms that feel more like a hotel than a hospital room.
‍

This supply side will be influenced by destination externalities such as brand awareness, political stability, accreditation of facilities, and accessibility. An increasing number of governments, including India, Malaysia, Thailand, Singapore, the Philippines, South Africa, Cuba and Puerto Rica, are actively promoting medical tourism.

Since quality is of critical importance in a patient’s choice of medical tourism destination, a priority for medical institutions in these countries is seeking accreditation to boost patient confidence to better compete in the medical tourism market.

Although the model applies to both domestic and international medical tourism, domestic medical tourism, by definition, is subject to less uncertainty associated with/resulting from destination externalities. Hence, it is presumably a more feasible option in terms of matching medical tourism demand with supply.
‍

THE POTENTIAL FOR INBOUND AND DOMESTIC MEDICAL TOURISM IN THE U.S.

It is imperative therefore stakeholders in the medical and tourism industries in the U.S. explore the potential for domestic tourism in their region. We suggest a research agenda that could include the theory of planned behavior, conjoint analysis and willingness-to-pay surveys to determine the consumer demand for medical tourism; economic models to determine the potential economic impact for a region should it attract medical tourists; and interviews with key players in both health and tourism sectors in order to identify areas of potential opportunities for specialization in medical tourism for a region.
‍

With domestic medical tourism likely to expand under U.S. healthcare reform, this research would be timely and have significant implications. If regions in the U.S. – particularly depressed ones – can build a reputation for specializing in specific areas of treatment and surgery, the economic and social impacts could be significant.

Medical tourism can generate diversified job opportunities for regions, not just in areas directly related to hospitality and catering, but also in terms of jobs for nurses, doctors and specialists which results in a much higher value added to the economy.

If specialty clinics like the Mayo Clinic in Minnesota can draw patients from across the nation on the basis of their specialization, expertise, research, reputation and patient success, then there is no reason others cannot follow suit.
‍

Simon Hudson is the Center of Economic Excellence Endowed Chair in Tourism and Economic Development at the College of Hospitality, Retail and Sport Management, University of South Carolina, Columbia. He has held previous academic positions at universities in Canada and England, and has worked as a visiting professor in Austria, Switzerland, Spain, Fiji, New Zealand and Australia. Prior to working in academia, he spent several years working in the tourism industry in Europe.

Simon has written five books; Snow Business, Sports and Adventure Tourism, Marketing for Tourism and Hospitality: A Canadian Perspective, Tourism and Hospitality Marketing: A Global Perspective, and Golf Tourism. The marketing of tourism is the focus of his research and in addition to the books he has published nearly 50 journal articles and 20 book chapters from his work. He is frequently invited to international conferences as a keynote speaker. Website address: www.tourismgurus.com