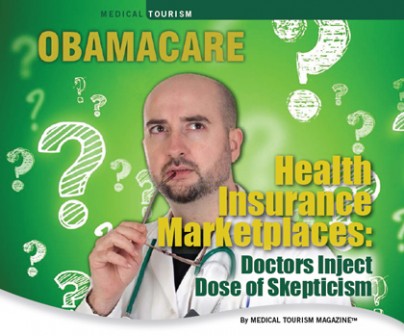 Doctors remain among the most skeptical stakeholders toward President Obama’s prescription for curing the nation’s healthcare ills. Surveys find an overwhelming number of physicians don’t believe that provisions of the Affordable Care Act will be implemented successfully in time to meet requirements of the legislation.

Just 11 percent of doctors polled expect the health insurance marketplaces to be up and running adequately enough to enroll uninsured Americans in the new plans, which are – theoretically – supposed to put more money in the pockets of physicians. What’s more, some 65 percent of those doctors, by a wide margin, said they are “not at all familiar” with how important aspects of those marketplaces are intended to pan out in terms of benefit levels, contracted rates with insurers, patient coverage and the claims process.
‍

The misunderstanding could pose a nasty surprise for physicians across the nation once the new plans go into effect. That’s because under rules of the exchange, a patient can go up to three months without paying premiums and still not get coverage formally dropped by insurers.

What can make matters worse for doctors is that the insurer isn’t obligated to pay claims incurred during the second and third month if that same patient isn’t paying premiums during that time. Those rules could mean that doctors end up eating the cost of the care they have already provided, or have their receivables stay unpaid for longer stretches of time.
‍

Pessimism should inject a heavy dose of reality into the White House, which has been trying to look beyond potential red flags in healthcare reform implementation and may be instead faced with a damagingly large number of doctors, most of whom patients rely heavily on for information, but who don’t seem to yet understand how healthcare will work themselves.
‍

LocumTenens.com, a physician recruiting agency which conducted one survey, found that doctors, for the most part, are
‍

“in the dark” because they don’t have the time or motivation to get up to speed with new provisions of the legislation. Shane Jackson, President and COO of LocumTenens.com, said the lack of awareness is “troubling.
‍

The Deloitte Center for Health Solutions reported that 60 percent of doctors surveyed revealed they are likely to retire earlier than planned, perhaps, within the next 1-3 years. News like this doesn’t bode well for reinforcements, either. Those doctors polled – nearly three-quarters – believe the nation’s best and brightest will look elsewhere and consider a career other than medicine.
‍

As more physicians are likely to compete with mid-level doctors for primary care patients on a larger scale, many professionals may be prompted to limit or close their practices to the increased number of newly insured – when and if the exchanges are ever ready.
‍

Dr. Jane Orient, a spokeswoman for the Association of American Physicians and Surgeons, was reportedly not surprised by the bleak prognosis.
‍

“I think it’s a disaster for patients,” said Orient, who addressed Obamacare with WND.com. “They may lose the doctor they relied on all their lives.”
‍

The biggest threat to healthcare reform could – in the long run — become a lack of doctors. It’s one thing to enable patients to obtain healthcare coverage. It’s a more important aspect to make sure there is a qualified physician to provide care.
‍

Changes to the profession already have some doctors in private practice looking for a way out. Experts say the number of physicians tired of rising business expenditures and shrinking reimbursements from insurers are unloading their practices by a 30-40 percent increase from five years ago.
‍

Doctors who bail out on their practices, typically, move on to work for corporate hospitals, creating what Orient described as “an assembly line” of care for physician and patient alike.
‍

Fed up with the hassle of filing insurance claims and collecting shrinking payments from patients, primary care physicians are also concerned that uncertainty lurking behind new regulations might lead to even greater administrative work and a need to pump even more money into their practices.
‍

By the time Obamacare goes into effect, Jan. 1, 2014, the ratio of primary care doctors to patients could get worse before it gets better. The law requires that most Americans obtain health insurance. Individuals with lower incomes who do not currently have coverage will be eligible to receive subsidies enabling them to purchase plans through online marketplaces called the health insurance exchanges.
‍

The shortfall of primary care doctors and the jump in numbers among the ranks of the insured may translate into problems scheduling appointments and longer waits as preventative care pushes the health problems of patients more toward chronic conditions.
‍

“The biggest threat to healthcare reform could – in the long run — become a lack of doctors,” said Jonathan Edelheit, President of the Healthcare Reform Center & Policy Institute. “It’s one thing to enable patients to obtain healthcare coverage. It’s a more important aspect to make sure there is a qualified physician to provide care.”
‍

Just how the added demand for doctors will be met remains uncertain. The “new normal” may necessitate major changes in how doctors offer care and how patients seek it. New tools for cost comparison are already enabling patients to get more bangs for their buck not only as close as the next state, but across the globe as well.
‍

Medical tourism has emerged for health and wellness seekers to find quality and treatments at attractive destinations overseas that, in all likelihood, will be less expensive or better quality than similar therapies available from the neighborhood physician down the road.
‍

The U.S. consumer-comparison site NerdWallet.com uses an online tool to offer choices to patients on more than 100 procedures – from hip replacements to root canal – at rates that range in scale, from most expensive to least. Global sites like this are bound to pop up in the future.
‍

Meanwhile, Obama was pushing the merits of cost-savings behind his healthcare reform law, arguing that putting extra cash into the pockets of the middle class outweighs any continued attempts to repeal his controversial legislation.
‍

Obama cited a $3.4 billion reduction in insurance premiums for nearly 78 million consumers in 2012. The President said the new healthcare exchanges offered in 11 states, thus far, had shown a significant reduction in insurance premiums and were evidence that his signature reform laws were working. This remains to be seen as employers are reporting up to 40% premium hikes even before the law settles in.
‍

The plaudits came as time shortens before state health insurance exchanges will begin enrolling millions of the currently uninsured and amid a decidedly cool or negative opinion of the Accountable Care Act expressed among nearly half of the general public in national opinion polls.