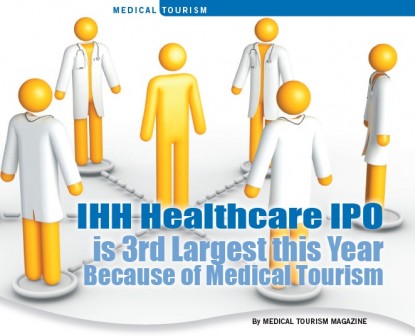 At a time when the world economy is in a downturn, there has been an amazing amount of Initial Public Offerings (IPOs) this year.  The social media site Facebook had its IPO on May 18, which was the largest ever for an Internet corporation: $104 billion was made at its peak market capitalization and was the largest IPO of the year. Felda Global Ventures Holdings was the second largest IPO this year, a palm oil company from Malaysia.

It is the second largest hospital operator in the world by market value, behind United States operator HCA Holdings. Managing director of IHH Dr. Lim Cheok Peng attributes some of the success of the company to its focus on international patients.
‍

The IPO of RM6.3 billion ($2 billion) at RM2.80 (roughly $0.89) per share is the third largest IPO this year.  JF Apex Securities estimated the fair value of the company at 3.00RM ($0.94) per share, and ECM Libra has a hold call on IHH stock at RM2.94 per share. This is attributed to its focus on international patients who bring in a lot of money for the corporation.
‍

Peng reports that 38 percent of IHH Healthcare is from Turkey, 36 percent from Singapore and 25 percent from Malaysia. He points out that being in eight separate countries mitigates the risk the firm faces, which further increases the attractiveness of investing in the company.

The company does not go only to other countries to diversify its holdings, but in these other counties it is a powerhouse, with 43.9 percent of market share on Singapore in FY11, according to JF Apex Securities. In Malaysia it has 15.1 percent market share and 5.2 percent in Turkey.
‍

In Malaysia, 5 percent of patient volume is foreign and 6 percent is from Turkey, with 10 percent of total revenue each. The bulk of patients in all of these locations was from Indonesia.  Patients from Libya, Iraq and the Balkans are on the rise as well.
‍

The company’s shares went public on Wednesday, July 25. Even amid weak economic times, the IPO did well in Malaysian and Singaporean markets. The offers opened simultaneously in both markets at 9.6 percent premium over the offer price of RM2.80.

The shares reached a high of RM3.19 but ended the day at RM3.09. In Singapore the stocks rose to S$1.245 and ended at S$1.225. Almost 309.3 million shares were traded, making it the most active firm that day. IHH raised an estimated $2 billion through the IPO, according to the Wall Street Journal.
‍

IHH Healthcare has realized the benefits that medical tourism can have for a healthcare group. International patients bring in more money to hospitals, and when spread out over multiple regions or counties, they can help keep the corporation stable and attractive to investors.

The foreign patients also boost the economy of the surrounding area, as they don’t just stay in the hospital; they spend money in the restaurants, shops and hotels. The international patients are a large boon to the company’s business.

The money they bring in does not only line the pockets of the investors and board of directors, but it also goes back to the system so the hospitals IHH oversees can offer the services they give to the foreign patients and to their domestic patients as well.

The international patient model allows IHH to raise the total level of healthcare in whichever area they are in.
‍

This IPO shows the benefits that medical tourism can bring. It benefits everyone involved. The patients get the healthcare they want at a price they can afford, the locals get added business and improved healthcare facilities, the hospitals get more money and better equipment, and the investors get sound investment in a company that will continue to grow.

The added benefit of this is that all of this is happening in multiple countries simultaneously. In a time when the entire world economy is struggling, medical tourism is a creative way to spur much needed growth.
‍