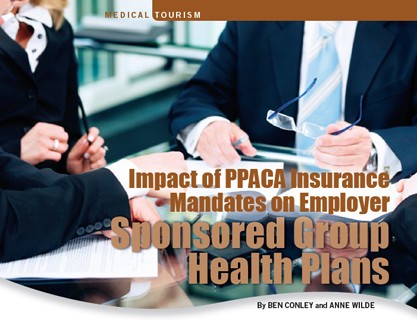 The primary purpose of the Affordable Care Act was to expand coverage to millions of presently uninsured Americans.  Even so, the Affordable Care Act contained a number of market reforms that have already had a significant impact on the individual insurance and employer-sponsored health industry.  These include such well-known provisions as the rule allowing kids to stay on their parents’ plan until age 26 and the rule prohibiting insurance companies from discriminating based on pre-existing conditions.  There are a number of lesser-known rules though that could significantly impact the way employers structure their group health plans.

I. Gating considerations – What is a group health plan?

Most of the insurance market reforms only apply to “group health plans.”  This seemingly straight-forward characterization actually includes a number of complex exceptions.  At the outset, the general rule is that most medical welfare benefits are considered group health plans, meaning they are subject to the Affordable Care Act’s market reforms.

Notably though, most healthcare flexible spending accounts are exempt from the law.  This is the case unless the employer contributes money to the employee’s FSA and the benefits are not subject to the traditional “use-it-or-lose-it” rules.
‍

Further, plans covering less than two active employees are exempt from most of the requirements.  This is more commonly known as the “retiree-only plan exemption,” because retiree plans typically contain no active employees.

Employers should exercise caution though, as a plan that seemingly only covers retirees could be construed to cover active employees as well.  There’s no hard-and-fast rule for making this determination, but some relevant factors include:

Stand-alone dental and vision plans are also exempt from the Affordable Care Act market reforms. There are two ways a dental or vision benefit would be considered a stand-alone plan:

There are a number of other types of welfare benefits that may be exempt from the Affordable Care Act’s market reforms; including workers’ compensation benefits, supplemental liability insurance, and on-site medical coverage (this list is not exhaustive).

II. Gating Considerations – What is a grandfathered plan?

But, it may avoid certain reforms until it loses grandfathered status.  Generally speaking, a grandfathered plan is any plan that was in existence on March 23, 2010 (the date the Affordable Care Act was passed by the U.S. Senate).

Grandfathered plans may remain grandfathered indefinitely, as long as at least one participant remains enrolled at all times, and as long as the plan sponsor doesn’t make any of the following prohibited changes:

In other words, each “legal plan” for annual reporting purposes may contain several benefit options. Most often, these include a PPO, an HMO, and possibly a high-deductible health plan. Changes to one of these options will not impact the grandfathered status of the remaining options.
‍

As called out below in the discussion of each market reform, grandfathered plans may be exempt from certain requirements until they lose grandfathered status.
‍

III. Insurance market reforms that apply to all plans (including grandfathered plans).

The following market reforms apply to all group health plans, regardless of whether they remain grandfathered or have lost grandfathered status.

IV. Insurance market reforms that only apply to non-grandfathered plans.

The insurance market reforms make up a small, yet important, part of the Affordable Care Act.  Penalties for failure to comply can be substantial (up to $100 per day, per affected participant).  So, plan sponsors should be careful to properly determine (1) whether they sponsor a “group health plan,” (2) whether their plan is grandfathered, and (3) whether their plan complies with all of the relevant provisions listed above.
‍

Anne B. Wilde is an experienced attorney and human resources professional who has advised employers on complex employment-related matters for fifteen years.  She has advised private and public employers from a spectrum of industries, a third-party benefit administrator and various plan sponsors of self-funded group health plans.  Anne has expertise in federal and state employment laws, ERISA, the Patient Protection and Affordable Care Act (healthcare reform), HIPAA, COBRA, contract negotiation and drafting, benefit plan design and drafting, employee relations, compliance issues, policy drafting and training.  She has consistently been recognized by clients as an exceptional communicator and advisor.