Indonesia's Failing Healthcare Industry and How Medical Tourism Can Help 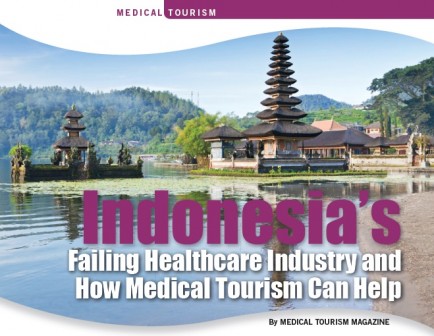 Indonesia is facing a large scale problem with their healthcare industry, which could cost the nation up to $50 billion to get the infrastructure up to standards by 2020. The problems with the Indonesian healthcare sector are many, not enough supplies, disparity between rich and poor and often discrimination against the poor and not enough government money to initiate growth.  The government is aware of the problems within Indonesia’s healthcare system and is trying to develop a creative way to fix them, the medical tourism and pharmaceutical market reform may be the proper tools to do it.

The lack of necessary medical equipment, supplies, doctors, and beds are some of the main concerns with the Indonesian healthcare industry. There is one hospital bed per 1,000 people in Indonesia, well below the world average of 3.6 per 1000 people. There are also only 25 doctors per 100,000 people.

Indonesian hospitals are also full of antiquated and obsolete equipment. These problems place the healthcare rating of Indonesia at the bottom of its ASEAN (Association of Southeast Asian Nations) peers.
‍

The issues plaguing the Indonesian healthcare market cause the rich Indonesians to spend as much as $600 million to travel to Singapore, Malaysia, and Australia for their medical treatment.  Sixty nine percent of all medical tourists in Malaysia are from Indonesia, according to Rhenu Bhuller, vice-president of healthcare for Frost & Sullivan Asia Pacific.

This causes quite a disparity between the rich and the poor, the rich leave to receive healthcare, and their money does not stay in the local healthcare industry so it stays downtrodden and poor and only the poor to average income people of Indonesia go to these failing hospitals. On some occasions, the hospitals turn away people who cannot afford to pay.
‍

According to the Jakarta Legal Aid Institute (LBH), this was the case for Rusdin Zakaria. Rusdin was complaining about shortness of breath and was taken to the ICU of Prikeasih Hospital in South Jakarta, where he was charged 7 million rupiah ($800) down payment which he and his family could not afford.

He was transferred to Fatmawati General Hospital, which would charge them less; he died before reaching the second hospital. Nurkholis Hidayat, the director of LBH reported the family was afraid to report the incident to the media, for fear of further discrimination.
‍

Although people leaving Indonesia for medical treatment is a part of the problem, medical tourism can also be a part of the solution. Indonesia has allowed foreigners to have 100 percent equity in private hospitals since 1992, and 1,300 hospitals have opened since then.

By allowing foreign competitors into the healthcare market, the government hopes to spur improvement in state hospitals in terms of equipment and quality of service. The competition should drive prices down as well. These foreign hospitals will bring with them a better quality and quantity of doctors, which is what the country needs.
‍

Indonesia is still a long way from having the infrastructure they need to host foreign medical tourists, but with foreign competition it will make the improvements they need to have in place happen faster.
‍

A creative solution would be for the Indonesian government who offers healthcare for the poor and pays around 75 percent of the total healthcare costs could instead pay for the nation’s poor to go to the hospitals the rich go to.

Another issue Indonesia faces is the remoteness in which some of the population lives. This is especially difficult for the Indonesians who need prescription medications. The country manager and chairman of the Asia Pharmaceutical Regulatory Industry Association (APRIA) John Hoeft notes the improvement in the access to the medications.

This change was made by improving distribution of its products through scientific means and efficient operating costs.  The government is also on board with this goal, they hope to have Universal Health Coverage (UHC) in place by 2014 and part of the UHC mandates an increase in the availability and quality of services.

The market is growing in Indonesia because of these advances. Ethical Pharma Market data from the first quarter put the value at 26 trillion rupiah ($2.756 billion), up 12 percent from last year.
‍

The reforms in the pharmaceutical market are a good first step on the long road to a complete overhaul of the Indonesian healthcare system.  It will be an especially long road for the poor of Indonesia, who are suffering the most from the broken system.

Through creative ideas and foreign competition Indonesia should be able get on the right track and give the entire population the healthcare they deserve.