Is Preventative Care the Answer to Reducing Healthcare Costs in America? 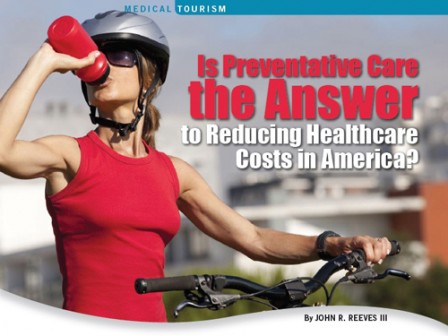 With the passing of the recent Obamacare initiative, the potential for added fuel to an already out-of-control fire has many involved with American healthcare worried about the ever-increasing costs associated with the American medical system. As Obamacare gains steam and begins to unfold, the need for cost combative ingenuity increases. Chronic illnesses and preventable diseases currently make up about three-fourths of the overall burden of healthcare costs. This is a staggering statistic simply because chronic and preventable diseases are just that – preventable.
‍

The goal of this article is to prove that there is indeed a connection between reduced medical costs and a healthy lifestyle, and that in much the same way that public awareness has brought down the teenage pregnancy rate for the first time in decades, such is possible for chronic disease prevention as well.
‍

IS PREVENTATIVE CARE THE ANSWER?

As of 2008, healthcare costs in the United States exceed 17 percent of the gross domestic product, a figure that breaks down to roughly $7,600 per resident. As far as industrialized nations are concerned, not one even partially comes close to America’s record output per resident. It takes only a brief stroll down any American street to see just how unhealthy American citizens are as a whole.

Our newer generations are continually moving further and further away from the once valued healthy lifestyles of the past. That being said, reducing healthcare costs has become a serious issue in the U.S. Does every American hold an individual key to the 309,047,796-piece puzzle that is our tremendous healthcare cost?

‍
Could the retort to such a conundrum be something as straightforward as lifestyle change? And if so, how can something as simple as preventive care or healthy lifestyle promotion possibly be the answer to augmented healthcare costs?
‍

The World Health Organization released a report in 2005 titled, “Preventing Chronic Diseases: a vital investment,” in which it outlined in detail how chronic diseases could be prevented and controlled, therefore reducing deaths and improving lives. While the goal of that article was not American healthcare cost reduction, its concepts of chronic disease prevention can be used as a potential blueprint for such. Facts remain facts.

Preventable illnesses make up approximately 70 percent of the burden of illness associated with American healthcare costs, so this seems like a much simpler and more affordable avenue than total healthcare reform.
‍

Promoting healthy lifestyle choices could also eliminate the vast majority of chronic diseases. There have been studies confirming that by presenting medical consumers with self-management materials such as pamphlets, magazines, books and even computer aides, service-usage rates improved by 7 percent to 17 percent, while providing only nominal medical guidance.

The money spent for such self-management materials is a fraction of what it would cost to fix these illnesses with surgical intervention once they cross the point of no return. The American healthcare system needs to follow the same mindset currently used to battle preventable events such as teen pregnancy, sexually transmitted disease and recreational drug use through government and private organization awareness programs. Millions of dollars are spent annually for these awareness programs; why should preventable disease and the promotion of healthy living be any different?
‍

The law of supply and demand applies to healthcare spending in that if we reduce the need, the demand for medical services will also be reduced, therefore reducing prices. By implementing a stronger focus on healthy well-being and preventative care, we can undoubtedly reduce the need for our citizens to seek out continual medical assistance for preventable problems.

It may be difficult and costly initially, but over the long-run it would indubitably prove beneficial. The answer does not lie in throwing around all sorts of money – that we do not even have – in order to get all American citizens covered under medical insurance programs. Doing so has the potential to “feed the beast.” Statistics show that a good majority of those uninsured are also facing preventable chronic illnesses, which would, without a doubt, raise healthcare costs even more.

The solution to any problem lies in getting to the base of the problem and changing it for the better. Preventive care and lifestyle change are the most cost effective solutions to healthcare overspending, and both lie at the base of America’s problems. It would not take much effort in order to make a turn for the better. America just needs to realize that all problems are not solved monetarily; some require only a little motivation, a goal and some elbow grease.

John R Reeves III is a graduate student at Buckingham Graduate School of National American University in Rapid City, South Dakota. He is the founder and CEO of Reeves International Medical Tourism, which is dedicated to assisting those unfamiliar with the medical tourism process in obtaining cost-effective health care alternatives throughout the world.