Jamaica Seeks to Develop as a Medical Tourism Destination 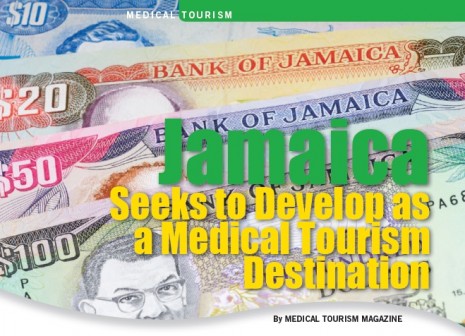 Jamaica is currently coming up with creative ways to improve the nation’s economy. Recently, the Jamaica International Financial Services Authority (JIFSA) was established to try and bring in more foreign investments. Specifically, Jamaica is trying to enter the $7 billion offshore financial services industry, an industry mostly associated with the Cayman Islands. In an article by the Jamaican Observer, Anthony Hylton, Jamaica’s Investment Minister stated “The establishment of this industry presents an excellent opportunity for Jamaica to be recognized as an international business center.” The entrance into this new industry could bring as many as 15,000 new jobs into the new sector and with it as much as $300 million to the government.

Along with expanding the financial sector of the economy, Jamaica is moving to expand their tourism industry into the medical and wellness tourism sectors as well. Jamaica is already a large tourist destination, so expanding would not be difficult.

They already possess the infrastructure necessary to support large scale tourism, with many resorts and hotels. Many of these destinations, like the vacation rental destination Silver Sands Villas offer their guests spa services from the renter’s villa or apartment.

‍
The plan of expanding into medical tourism is two-fold. The first is to continue to grow the important tourism market of the island. The second is to bring desperately needed foreign direct investment in the form of state-of –the-art medical facilities.

“The growth of this form of tourism would lead to the development of new resorts that are conducive to recuperation and rejuvenation, present new possibilities for the employment of highly skilled and specialized health professionals locally, and recapture those health professionals who have migrated,” said former Tourism Minister Edmund Bartlett.

Grupo Hospiten, a hospital group with 12 hospitals in the Dominican Republic, Puerto Rico, Mexico, and Spain, is considering the construction of a 200-bed hospital in Montego Bay at the price of $20 million.
‍

CTA Economic and Export Analysts presented a report at the Health and Tourism Workshop in Kingston which concluded that the healthcare sector in Jamaica is not prepared to handle the inbound medical tourism, yet. Jamaica must attract more foreign investment in order to build the medical infrastructure that will be needed.

Jamaica already has the airports and resorts needed, but not the actual hospital space. The report went on to say that the first step for Jamaica to establish their desired medical tourism industry is “to agree on and set a clear government policy clarifying and defining the roles and responsibilities for medical tourism agencies and health ministries.

The legislation regarding medical liability insurance will need to be reviewed, along with the above-mentioned investments in medical tourism facilities.”
‍

Public-private partnerships (PPPs) are a proposal to build the needed medical infrastructure. The benefits of PPPs are that both the public and private sectors benefit from the partnerships.

The private sector gets to expand and grow with limited risk, while the public sector gets benefits from the added hospitals to the region and the jobs the expanded industry will bring. Hylton said it best when he said “we must work together. This country does not belong to the government or to the private sector −− it belongs to all of us.”
‍

Jamaica does have some competitive advantages in terms of medical tourism however. The close proximity to the United States is a major boon for the industry, many medical tourists do not like to travel far; and with the recent ruling on healthcare reform in the U.S., many more Americans may see medical tourism as a faster, less costly alternative to domestic healthcare.

A medical tourism destination this close to the U.S. will only benefit from the current reforms. This does not mention the aging population of the U.S. who will need medical attention as well. The beautiful sandy beaches of Jamaica is also beneficial to the industry, “if you are not critically ill, it must be a good thing to be able to go to a place for treatment where you can have a vacation at the same time,” says Reginald Budhain, a Jamaican government official.

The idea of expanding into medical tourism is being taken very seriously by the Jamaican government. The Prime Minister at the time Bruce Golding created a government special task force through Jamaica Trade and Invest to examine Jamaica’s potential for medical tourism.

The task force is chaired by the Tourism Ministry and will be in charge of developing the policy and regulatory framework. JAMPRO, the Jamaican investment and promotion agency has also gotten technical assistance from the Commonwealth Secretariat to create a “road-map” detailing the growth of the medical and wellness tourism to aid in the entry into the industry, and the expansion of the services industry in general.

The money expected to come into Jamaica as a result of medical tourism is large. It is observed that the average medical tourist spends as much as $5,000 a week, which is more than double what an average tourist to Jamaica, spends in a week.
‍

The two pronged plan of Jamaica’s economic expansion is expected to improve the welfare of Jamaicans, and improve its global image. Both sides of the expansion, the financial and tourism sectors are also synergistic.

The people who have their money in Jamaican financial institutions will visit Jamaica often to talk to the people who are in charge of their money. While they are there, the investors will visit the resorts, hotels, restaurants, beaches, and if things work out, the hospitals.

The medical tourists will further boost the economy, where it will be further invested into the growing financial market. Jamaica understands the benefits that medical tourism can bring to a nation’s economic development, especially when the development is combined with other areas of expansion.