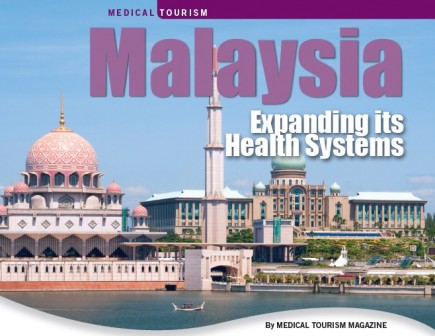 Malaysia has its eyes set on medical tourism. With hopes of building its economy, the country is looking to expand its medical services and increase cooperation between its public and private sectors. The idea is that healthcare will become more specialized and will attract more foreigners seeking high quality and affordable medical treatments.

Malaysia spends about 4.7 percent of its gross domestic product (GDP) on healthcare, according to the Malaysian Prime Ministers Department’s Performance Management and Delivery Unit (PEMANDU).

The government pays a significant portion of the country’s total health expenditures, which are much higher than that of many of its neighboring countries but much lower than developed countries.

In addition, a report from the Malaysia Medical Tourism Outlook 2012 stated that the country has one of the most developed healthcare infrastructures in the region based on its services, English-speaking staff, foreign-trained specialists, number of medical schools and stringent government regulations on the standards of healthcare delivery systems.
‍

Malaysia has a dual healthcare system, the public sector – which is subsidized by the government – and the private sector. The Ministry of Health Malaysia (MOH) has a longstanding commitment to providing universal access to high quality healthcare, which is offered through a nationwide network of clinics and hospitals at affordable rates. The private sector, however, is predominantly in urban areas.
‍

According to PEMANDU, public healthcare does include a full range of services, but lately the focus has been shifting toward prevention, disease control and rehabilitation, rather than curative services. So, the MOH recently created a public private partnership (PPP) in order to increase participation of the private sector within the general healthcare system.

Because the private sector plays a large economic role in the country, certain medical services will be “outsourced” and offered as part of the public health system.
In 2011, Malaysia established about 220 private hospitals, according to Rhenu Bhuller, vice president of Healthcare Frost & Sullivan Asia Pacific.

In an interview with BizHive Weekly, she said that the market size of the private healthcare sector is almost MYR8 billion (US$2.5 billion), an increase of MYR2 billion (US$628.8 million) in 2010.
‍

“This growth is driven by the Malaysian population seeking higher and better quality private healthcare, which has, for example shorter waiting times,” she said.
‍

This growth, she explained, is also from an influx of Singaporeans using their health insurance funds at registered Malaysian hospitals and of Indonesians coming for cheaper services at the country’s private hospitals.
‍

Because the vast majority of private hospitals are in urban areas in West Malaysia, private healthcare providers are interested in expanding their reach to a wider geographical area. This will help better circulate their services and perpetuate the goals of the PPP.
‍

The government has made healthcare a priority for development in the Economic Transformation Programme (ETP) with the idea that it will help convert the country into a higher income economy.

The extension of the private healthcare sector with services like imaging and medical diagnostics will support the stretched services of the public sector, she explained, therefore increasing their accessibility to people in more remote locations.
‍

“Providers here need to focus specialty or differentiation through holistic healthcare on specialty services,” she said. “There are still opportunities in underserved towns for smaller day private outpatient clinics, as well as opportunities to promote Malaysian private healthcare services to patients such as from Australia or North Asia.”
‍

In addition, the availability of insurance plus the increasing awareness of the value of health insurance has created a higher usage of private health services. As of March 2012, there were 27 registered medical insurance providers in Malaysia, nine of which also provide life insurance policies.

Organizers of the ETP also expect that the training of additional physicians and medical technicians will facilitate further growth. According to PEMANDU, healthcare industries in Malaysia would double their human capital count to 340,000 by the year 2020.
‍

In terms of medical tourism, the importation of foreign doctors and the addition of staff will improve the doctor-to- patient ratio and thus increase access to medical tourists. However, the MOH and Malaysian Medical Association have yet to discuss the current regulations in place which restrict the entrance of foreign physicians.

But still, the MOH wants to capitalize on the country’s affordable treatments and combined packages of hospitality with resort stays, in order to attract foreigners seeking less costly, high quality treatment. Also, tourists should be drawn to the country’s eight medical facilities with accreditation by Joint Commission International.
‍

Malaysia still has far to go in its healthcare development. In continuing to build on its infrastructure, the country needs to distinguish itself from emerging markets like Korea and Taiwan and established strongholds like Singapore. It also needs to find areas of specialty that it can foster and promote. According to the Malaysia Healthcare Travel Council, the country specializes in cancer treatment and pain management, cardiology and cardiothoracic surgery, fertility treatment, general screening and wellness, orthopedics and rehabilitative medicine.

Expanding its medical tourism base in addition to the partnership between the public and private healthcare systems will help Malaysia’s economy to grow.

“This is also a way in which private healthcare services access can be expanded throughout the population and subsequently ease the strain on public healthcare services,” Bhuller said, “as the strongest and most sustainable healthcare systems are those where there is a good balance between public and private usage.”