Medical Tourism~ A Solution for Healthcare 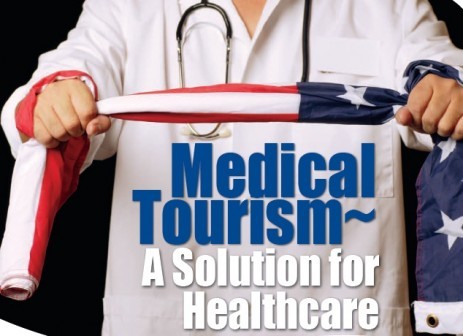 It’s too early in the implementation phase to predict the specific ways health reform will impact the medical tourism industry.  However, the health care problems that spurred the growth of medical tourism in the first place will not be solved by the Patient Protection and Affordable Care Act (PPACA).  In fact, many problems, such as high costs, are likely to increase under the legislation.  Luckily, medical tourism can help solve these concerns.

In the US health care system, there are few incentives to control health care spending and hold down costs.  Under the reforms recently signed into law, nearly everyone’s incentives will become worse, not better — especially patients’.

The cornerstone of health reform is an individual mandate that requires virtually all U.S. residents to have health coverage.  This certainly will do nothing to control costs.  Indeed, because of the third-party payment system (employer-sponsored plans, insurers and government), every time a patient in the United States spends a dollar on health care, only 12 cents comes out of his own pocket, on average.  This means patients have an incentive to consume health care until its value to them is worth only 12 cents on the dollar.
‍

During his campaign, then-candidate Barack Obama’s health advisors said they could save the average American household $2,500 a year through such reforms as coordinated care, preventive care, evidenced-based care, pay-for-performance care, electronic medical records and a slew of similar ideas.  The Congressional Budget Office responded that these reforms will only save about 1 percent of what President Obama’s team projected, and maybe nothing at all.

Basically, you cannot expect to change the practice of medicine by merely telling doctors (and hospitals) to practice medicine in a predetermined way with top-down reforms.  Almost nowhere in the health care system are providers competing for patients based on price.  Since they are not competing on price, they have no interest in reducing the cost of care.  The PPACA does nothing to change this fact.
‍

What This Means for Medical Tourism

Despite lower cost, the quality of health care abroad can be high.  For example, foreign doctors are often trained or board certified in the United States.  More than 300 hospitals abroad are accredited by the Joint Commission International — the arm of the organization that accredits American hospitals participating in Medicare.  Some foreign hospitals are owned, managed or affiliated with prestigious American universities or health care systems, including the Cleveland Clinic, Johns Hopkins and Harvard International.  The best foreign hospitals not only post quality data (such as their case-adjusted mortality rates), they compare their rates to those at the best U.S. hospitals.  There are even medical travel bureaus that help patients find high quality care to meet their needs.
‍

On a recent trip to Guatemala City, Guatemala I toured a facility run by Grupo Hospitalario, a private hospital chain.  The CEO of the facility was a Cornell University MBA.  Most of the doctors who practice there are U.S. trained, and most are board certified.  They have all the latest equipment and can do just about anything an American hospital can do.  For starters, the hospital we visited looks like a modern hotel — rooms come with a TV, minibar, Internet hookup and 24-hour room service.  And the price is right: a private room is $55 a day (a suite is $85).
‍

Currently, only 10 percent of their patients are foreign and only 2 percent to 3 percent are American, but as the U.S. health care system becomes increasingly dysfunctional, a low-cost, high-quality alternative like Grupo Hospitalario could become a hotspot for individuals trying to escape suffocating medical expenses.
‍

Estimates vary, but more than a half million Americans travel outside the United States for health care every year, and the number is growing.  Americans are finding package prices that include airfare and hotel rooms for one-third, one-fourth or even one-fifth of what they would pay in the United States.  Virtually every major U.S. insurer is actively studying how to enter this international market.
‍

Traditionally, uninsured patients were the ones who traveled abroad in search of lower cost, high-quality health care.  However, beginning in 2014, all businesses with more than 50 workers will be required to offer employee coverage or pay a per-worker fine.  With no cost control provisions in the PPACA, health plans will have to find out-of-the-box solutions to the ever-rising cost of medical care.  Increasingly, runaway costs will force employer-sponsored plans to offer workers the opportunity to travel abroad for some medical procedures in return for a share of the savings.
‍

I have no confidence the health reform legislation will solve our health care problems.  But I do have a lot of confidence that entrepreneurs can.  As entrepreneurs develop the medical tourism industry, it will become commonplace for employers to help workers find a high-quality health care provider abroad, saving both the employer and employee money.  Domestic hospitals and clinics will recognize their lost business and begin to compete for patients on the basis of price.

John C. Goodman is president and CEO of the National Center for Policy Analysis.  The Wall Street Journal and the National Journal, among other media, have called him the “Father of Health Savings Accounts.” He is also the Kellye Wright Fellow in health care.  The mission of the Wright Fellowship is to promote a more patient-centered, consumer-driven health care system.

In an unsurpassed national education effort to communicate patient-centered ObamaCare alternatives, Dr. Goodman has spearheaded a grassroots campaign resulting in more than 1.3 million petition signatures and 1.2 million emails to Congress.  The “Free Our Health Care Now” petition is the largest online petition ever delivered to Capitol Hill.

He is frequently invited to testify before Congress on health care reform and retirement topics and is the author of more than 50 published studies on topics such as health policy, retirement reform and tax issues and nine books, including Lives at Risk: Single Payer National Health Insurance Around the World; Leaving Women Behind: Modern Families, Outdated Laws; and the trailblazing Patient Power: Solving America’s Health Care Crisis, the condensed version of which sold more than 300,000 copies.

Goodman received his Ph.D. in economics from Columbia University, and has taught and done research at Columbia, Stanford University, Dartmouth University, Southern Methodist University and the University of Dallas.