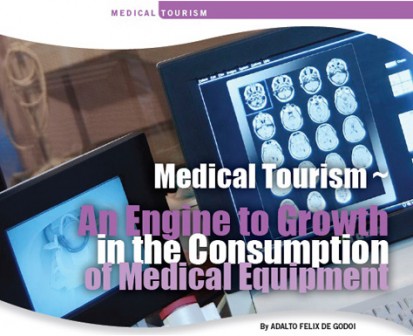 In many countries medical tourism has been a model of economic activity with a significant growth in recent years. This is particularly the case in Asia and Latin America, both emerging as major players in this market. Countries like Thailand, India, Costa Rica, Brazil and Mexico are becoming quite competitive as destinations for medical tourism, exceeding international benchmarks established from most developed countries.

Some of these countries have been treating patients worldwide for decades. Combining the experience gained with existing technology, increased knowledge and participation in international medicine; this has influenced the consumption of medical equipment and is currently becoming an engine for growth in the healthcare industry.

The international macroeconomic climate and unfavorable scenery in many developed countries in recent years has helped some emerging countries take advantage of the deterioration of strong currencies such as the dollar and euro, to import medical equipment at a lower cost, in comparison to years prior to the international crisis.

Conversely, the currency of some countries such as Brazil actually appreciated, making it far more cost effective to import high-cost equipment in segments such as the healthcare industry. Though much of the equipment is aimed at the private healthcare sector, and consequently also utilized as a valuable marketing tool to engage and attract international patients with the “state-of-the-art”, “cutting edge technology”; the reality is that the benefits of such innovations trickle down to the local population by stimulating the economy of the destination and providing local patients with access to treatment options they may have not had before.

SUPPLY AND DEMAND ~ WHO’S WHO

The worldwide growth of medical tourism can also be observed by the demand for medical and hospital equipment for countries in Asia and Latin America. There are currently about 12,000 companies worldwide that produce and sell medical and hospital equipment generating revenues exceeding $50 billion USD, among which are well-known companies such as GE Medical Systems, Varian, Siemens Healthcare, Hill-Rom among other regional and national firms whose sales increased significantly in recent years. It is observed that countries working with medical tourism are some of the major buyers of medical equipment; a better healthcare infrastructure creates trust and attracts highly qualified demand, able to pay a premium price to have a top quality service. The same equipment used for an inhabitant serves the overseas patient as a sales strategy.

Among the countries that consumed more medical and hospital equipment in recent years are countries embracing medical tourism as occurring in Latin America, for example, Brazil with a 25% growth in 2008 and importing about 34.28% of the region amount. The demand comes to be higher than in richer countries that do not necessarily have the equipment they sell in the same proportion of the countries, which are the “buyers”. The sale of the equipment in the U.S. between 2003 and 2007 was greater for countries involved in medical tourism than highly developed countries like Canada, Japan, Germany, Belgium, Switzerland and others in an average ratio of 10.1% more. Contributing to the expansion of the healthcare sector in the region and acting as an engine to the international economy importing equipment of high value-added from the country’s most affected by the crisis.

The largest importers of medical equipment in Latin America are Brazil, Chile, Mexico and Venezuela, which in 2008 accounted for 75.05% of the Latin American market share. Other countries consume at a slower pace as Bolivia, Paraguay and Uruguay. Obviously it’s impossible to state that just possessing advanced medical equipment increases the confidence of patients seeking medical treatment abroad, but the high technology in an existing healthcare facility helps promote and attract more patients instilling confidence in the healthcare facility. The graphic below shows the Latin America participation in the region with the consumption of medical equipment in the diagnostic imaging segment.

Each country usually imports the equipments, which reflect their areas of expertise or specific needs for its healthcare system, renewing or increasing the public and private healthcare technology. The table below shows the proportion of most imported equipments in three of the main importer countries.
According to ABIMED (Brazilian Association of equipment and products importers, medical and hospital suppliers) in the first quarter of 2010 the industry of materials, equipments, medicines and diagnostics generated 2,100 new jobs over the stock of labor in 2009. The Department of Labor also reported that the level of employment, taking into account the sum of the activities of the industry was 6.9% higher than the same period in March 2009. The acquisition of new equipments also resulted in hiring more skilled labor.

Another interesting find is the growth of total pharmaceutical sales in the last five years, and despite the international crisis they will probably grow in three of the five regions studied, including Latin America.
Medical tourism is experiencing a rapid growth worldwide, especially in countries within Asia and Latin America. Despite the international economic crisis, which affected many highly developed countries; they became important destinations for medical tourism attracting important part of the international demand and becoming world renowned in several medical specialties. With a comprehensive and advanced healthcare system and infrastructures, several countries in Asia and Latin America have also become accredited by international bodies, such as Joint Commission International (JCI) having the same quality level the best hospitals in the most advanced countries have, attracting skilled labor and consuming more high-tech and medical equipment than many others advanced countries.

Adalto Felix de Godoi is a specialist in Strategic People Management and holds an Executive MBA in Strategic Business Management. He is also a healthcare consultant, teacher and author of several articles and books in the healthcare industry with over 22 years of experience.