Medical Tourism in the Ashes of Healthcare Reform 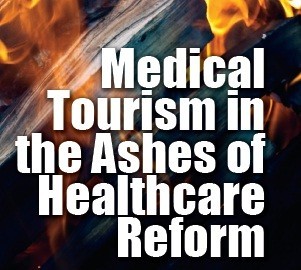 Healthcare Reform was dead in the United States and now it’s back and it looks like it’s going to pass. What is amazing about healthcare reform in the US is that it is actually not going to lower healthcare or health insurance costs as initially promised, but will effectively significantly increase the costs.

By some research it is estimated that the cost of health insurance for young people could be raised by almost 70% each year. Even more amazing is that healthcare reform legislation in the US will do nothing to actually deal with the real reasons why healthcare costs are so high and definitely is not going to have the major effect that has been promised to the American people.

What does it mean?

One of the most important aspects of healthcare reform is that it waives pre-existing conditions for Americans and that all Americans must be treated fairly in regards to costs, which means that under healthcare reform sick Americans should be paying the same amount for health insurance as healthy Americans.

This means millions of sick Americans who previously were denied insurance or couldn’t afford it now will have access to it and that in order for the prices for sick and healthy Americans to be the same, health insurance prices have to rise.

Many US health insurance companies and employers had put off their plans to implement medical tourism because they were waiting to see if healthcare reform passed and if it did pass what it actually meant. Health Insurance Companies have been in a huge defensive position cutting all new initiatives and projects, and fighting healthcare reform because healthcare reform was going to cripple the insurance carriers and for some threaten their very existence by putting them out of business.
‍

Also, employers didn’t want to implement anything new, because they didn’t know if the government was taking over health insurance or certain things under healthcare reform would be allowed or not allowed.

Now that it looks like healthcare reform is going to pass, we will see a new and excited interest in medical tourism as employers and insurers look for creative ways to stop what will be a very rapid increase in the costs of health insurance in the US under healthcare reform. It will be very exciting to see the renewed interest in medical tourism from insurance companies and employers in the US and to see this industry start to grow!
‍

Another huge sector of medical tourism is “ethnic employers.” Ethnic employers are employers who have operations in multiple countries. We are in a global world and business has no borders. Many companies are conglomerates that operate all over the world. I predicted several years ago that these ethnic employers would start leading the charge in medical tourism and I have been encouraging governments ever since to support it.

A perfect example is Daewoo and Woori Bank of Korea who this past year implemented medical tourism for their US based employees to travel back to Korea for surgeries under medical tourism. The Korean government used its influence to open the doors for this to happen and this will be an example to countries around the world to work with local companies who have international offices to adopt medical tourism programs.

This could open the door to millions more patients traveling in the future as international companies allow medical tourism to their company’s headquarters in their home country. Korea has a huge initiative in this area and in 2010 we will see more Korean conglomerates offering medical tourism to their employees in different parts of the world.
This type of initiative should be taken up by other countries and governments.
‍

Other international health insurance companies simply put their head in the sand like an ostrich and don’t want to be involved in medical tourism or global healthcare. But times have changed and you either change with the times or you fade away.

Just like companies said they would not outsource administrative and customer service to overseas countries some o f these insurers are saying they won’t outsource healthcare.
‍

But, we are in a global world. If an employer wants to do it and that international insurer won’t do it, they will find another insurance carrier. This is actually happening right now. Sometimes insurance companies get stuck in a rut of the way they have always done things, and they need to get slapped around a little to wake up and realize times have changed.

Jonathan Edelheit is CEO of the Medical Tourism Association with a long history in the healthcare industry, providing third party administration services for fully insured, self-funded and mini-medical plans to large employers groups. He may be reached at Jon@medicaltourismassociation.com