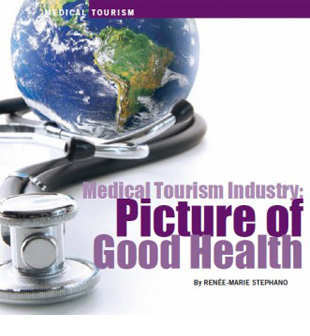 Many people don’t think twice when given the chance to travel. Despite economic descents around the globe, world travel and tourism is as robust as ever. In fact, research shows journeys abroad continue to grow – totaling a 3 percent increase to the world’s Gross Domestic Product – eclipsing several manufacturing industries and services in the business, financial and retail sectors.

As an offspring to this preference, patients, healthcare professionals and medical technology can be found today in the world’s most cosmopolitan landscapes, homes to social melting pots that breed trade and innovation, to pristine landmarks, where golden beaches compete with lush green tropical plants.
‍

This limitless access to healthcare services coupled with capital funding and systematic organizational planning and development have fueled the movement of travelers across borders to seek affordable, quality and timely medical treatment.
‍

A bleak international economic climate has spurred patients from even the wealthiest nations to shop for low-cost healthcare in countries that might have previously been thought of as less developed on the global radar. Despite this movement and unprecedented publicity from leading media entities, the role of medical tourism and its impact on inbound and outbound countries is difficult to qualify and quantify.

Even less is known about socio-demographic profiles, age, gender, existing health conditions and status when attempting to define the medical tourism market.

Certainly, well-intentioned attempts have been to track and evaluate clinics, hospitals, medical tourism businesses and patient make-up; many of which report growth in patient numbers during the past 12 months and claim no reason not to expect further expansion within the next five years.

Based on these surveys, the forecast for medical tourism looks optimistic; however, these endeavors to evaluate and explain have been far from systematic and have given rise to more critical debate about statistics, rather than solid answers.

What should be worth noting is that this healthy prognosis is, indeed, consistent with earlier findings from the Deloitte Center for Health Solutions on the process of “leaving home” for treatment or care abroad or elsewhere domestically. According to the internationally respected 2008 Survey of Health Care Consumers2:
‍

It is important to understand that medical tourism has been around for thousands of years dating back to the advent of Ayurvedic medicine, when travelers flocked to ancient India to partake in specialized diets and sample exotic herbs that were said to prevent illness and promote wellness.
‍

…patients, healthcare professionals and medical technology can be found today in the world’s most cosmopolitan landscapes, homes to social melting pots that breed trade and innovation, to pristine landmarks, where golden beaches compete with lush green tropical plants.

Since then, medical tourism has evolved to include varying definitions and names, often to fit the needs of self-serving individuals, locations and challenges. That said, establishing procedures and, eventually, numbers that represent medical tourism is far from straightforward.

Case and point, citizens living within the European Union are authorized to receive healthcare services in any member nation; making recordkeeping far from accountable and problematic to prove for providers, facilitators and governing nations alike.
‍

Few are likely to doubt the promising observations from Deloitte or that medical tourism will witness further breakthroughs in the near future. What researchers and tracking services will find disagreement with – more or less – is the size of the industry; in large part due to differences in the definitions of medical tourism.
‍

As such, for this purpose, medical tourism is when a consumer elects to travel across international borders for the intention of receiving some form of medical treatment, which may span the full range of services, but most commonly includes dental care, cosmetic surgery, elective surgery and fertility treatments.

Based on the cost for services in the United States along a variety of specialties and procedures, the leading destinations7 for savings are:

As patients seek to come out from under greater financial burdens related to high co-pays while costs become clearer and more accurate, affordable treatment alternatives are predicted to continue to foster medical tourism growth, especially for procedures that are traditionally not or may not soon be covered by health insurance. For example, comparative medical tourism prices for heart bypass procedures in select countries8 include:

Perhaps, because it is typically not covered by employerbased insurance plans, cosmetic surgery has seen and is expected to see the biggest growth in medical tourism in the next five years. One survey found that 56 percent of the respondents at medical tourism hospitals, clinics and businesses reported cosmetic surgery as the most sought-after treatment abroad; followed by expected growth above 40 percent for dental treatment, cancer care and infertility assistance.
‍

…the forecast for medical tourism looks optimistic; however, these endeavors to evaluate and explain have been far from systematic and have given rise to more critical debate about statistics, rather than solid answers.

Accurate and verifiable statistics are just not available and, in all likelihood in many instances, have never been recorded; although Deloitte last estimated the medical tourism market to be around $100 billion by now, $4 billion in Asia alone.
‍

So, it is probably safe to suggest that medical tourism is providing financial dividends to host countries based upon the expansion of facilities, establishment of programs and investment of both public and private dollars. Justifiably, there is no greater indicator of progress than the increasing number of foreign hospitals receiving Joint Commission International accreditation.
‍

Many hospitals in Southeast Asia, particularly, — Malaysia, Thailand and Singapore — are even trying to compete with facilities in the United States by purchasing expensive, state-ofthe- art equipment, which, in turn, embraces more international patients and welcomes physicians trained in the United States and Europe who are affiliated with highly reputable medical providers at home. Other examples, cited by Deloitte11, include:
‍

As variables, such as government and private-sector investment, infrastructure, accreditation, medical technology, reputation, and achievements of both facilities and staff, are developed, sustained and marketed, this already widespread territory should expand.
‍

Price, medical quality and service aside, like any savvy shopper, medical tourists now want even more bang for their buck. Distance can play a limited role in selecting a medical tourism location when alternative activities that most resemble a min-vacation – from paragliding or waterskiing to sightseeing among ancient ruins or sauntering on a tropical beach – become more than just an aforethought.
‍

No Pain, No Gain

Most significant is that the body of world travel and tourism is predicted to grow by 3.1 percent this year and again outpace the world GDP in 2013.12 Research and examination in the development of medical tourism and the industry’s implications need to keep stride with this movement. Methodical procedures need to be established to alert nations of actual and potential benefits of providing affordable, quality and timely care.
‍

To this end, some national governments and international organizations have begun working to establish a standard accounting framework for the comparable measurement and reporting of health expenditures by the resident populations.
‍

Of course, financial swings and uncertainty related to healthcare reform both in the United States and abroad can throw a monkey wrench into even the most promising plans for patients pursuing medical tourism and those nations hoping to host them.
‍

What is most reassuring to recognize is that – like any sustainable industry worth its mettle – medical tourism has experienced and survived “growing pains” related to the world at large. Only time — and the ability to offer continued savings of up to 70 percent after travel expenses in an age when healthcare costs keep skyrocketing13 — will tell the exact extent of that growth.
‍

Renée-Marie Stephano is the president and co-founder of the Medical Tourism Association® and editor-in-chief of Medical Tourism Magazine™ and the Health and Wellness Destination Guide series of books. Ms. Stephano has authored several books from “Developing International Patient Centers, Best Practices in Facilitation,” to “Medical Tourism for Insurers and Employers,” and the most recent, “Engaging Wellness.”