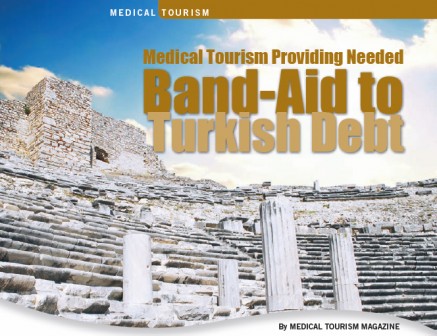 Despite expectations of a widening debt to the rest of the world, the Turkish economy looks healthy in the eyes of many who continue to invest in its sun-drenched Mediterranean shores where package tours not only include exploring archeological evidence and shopping, but procedures from brain and cardiovascular surgeries to organ transplants and stem cell implantation as well.
‍

Turkish tourism figures have increased by double-digit percentages over last year, when 37 million tourists visited the sixth most popular travel destination in the world. About 270,000 of those visitors came for surgical procedures, generating $1 billion in revenues, representing a small, but growing fraction of tourism receipts, which local businesses often complain don’t do what they should for their pockets.
‍

As Turkey tries to boost tourism revenues and narrow its account deficit, the government is aiming to capitalize on the number of visitors who are willing to combine medical treatments with a short vacation and, at the same time, raise $7 billion by attracting patients to a higher quality of healthcare without compromising costs.
‍

The approach is not entirely novel. Turkey has been matching visiting patients with doctors for the past decade. With more than 140 members, the Turkish Healthcare Travel Council has served as a tourism cluster in and outside the country since 2008.

“A large issue facing the industry today is that many providers are not approaching medical tourism programs sustainably, which means not looking at their plan for the long-term future or local impact.”
‍

A majority of the patients come from European countries like Germany, the Netherlands, and Belgium, where heavily congested healthcare systems move visitors to seek more readily accessible surgeries. At the same time, patients from less developed nations are attracted to the Western trained doctors and new facilities popping up in Turkey’s flourishing private healthcare network.

Throw in cost savings up to 60 percent less than comparative procedures in Western Europe and it’s no wonder the Turkish government expects to double the number of medical tourists to a half-million in the next two years.
‍

Situated in the middle of the Aegean shores, Izmir is considered a prime medical tourism destination in Turkey. The transportation hub can be reached by road, air or seas and offers 14 public, three university and 11 private hospitals as well as popular thermal springs and natural treatment establishments.
‍

“Medical tourism could also get a bump if the government follows through on a proposal to create airport-accessible, tax-free healthcare zones, which, authorities hope, could increase the number of patients from abroad by up to 85 percent.”

During the congress, participants from around the world evaluated the current state of the medical tourism industry, identified opportunities and problems, and offered solutions during their stay in the third-largest city in Turkey and home to popular procedures that include thalassotherapy, Invitro fertilization, plastic and esthetic surgery, and dental and eye care.
‍

Renee-Marie Stephano, president of the Medical Tourism Association® and a featured speaker at the congress, says that in order for Turkey to extend its healthcare system to a global audience and sustain medical tourism as a viable economic entity, the country must lift barriers to foreign direct investments and insurance portability, increase rates of innovation and change public perceptions.
‍

“A large issue facing the industry today is that many providers are not approaching medical tourism programs sustainably, which means not looking at their plan for the longterm future or local impact,” said Stephano, who presented “Globalization vs. Localization and Innovation through Sustainability.”

“This approach ensures that medical tourists are receiving the best care possible. It should also be noted that developing sustainable programs will not come overnight, and must be monitored and adjusted regularly in order to achieve maximum benefits.”
‍

Bank and the World Bank’s International Finance Corp have taken advantage of the loosened reigns on government restrictions.
‍

Medical tourism could also get a bump if the government follows through on a proposal to create airport-accessible, taxfree healthcare zones, which, authorities hope, could increase the number of patients from abroad by up to 85 percent.
‍

The proposal would build upon Turkey’s current bedrock of 750 sound private hospitals and clinics, 49 of which are Joint Commission International-accredited; and 660 thermal complexes and 270 spa and wellness resorts – a backbone of the country’s medical tourism industry built on top of a major geothermal belt where curative therapy means the application of medicinal waters for treatment.
‍

Boosting tourism revenues is critical to capping Turkey’s current debt, which closed to around 6 percent of Gross Domestic Product in 2012 from about 10 percent in 2011. Tourism, which netted $21.6 billion in receipts to the Turkish economy last year, could benefit from an infusion of medical tourism as a strategy to defray competition from nearby Greece and Spain for the tourist dollar. Travel and healthcare leaders in Turkey are hoping medical tourism can be that lifeblood.