Philanthropy for a Profitable International Program: A Case Study at Jackson Health System 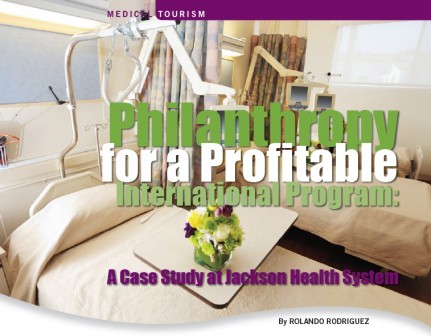 Hospital international programs are developed for one basic reason: to increase revenue. For a private hospital, the goal is increased profits. But for a public or non-profit hospital, the real need is to earn added revenue that helps support the core mission. Tax support may provide the basics, but is never enough to meet the complete need. So why not create an international department that helps support the core mission?
‍

The first challenge for most non-profit hospital systems is to find funds required to start the program.
‍

Necessary support services and infrastructure must be put in place; otherwise a short burst of success is likely to be followed by steady dissatisfaction by clients, including insurance companies, referring physicians and the patients themselves.
‍

How to find needed the funds? Use OPM (Other People’s Money). And that can sometimes be accomplished through a philanthropic campaign which creates an international program leading to increased revenue and a new, more exciting hospital brand.
‍

At Jackson Health System (JHS, or Jackson Memorial Hospital) in Miami, Florida, we did just that. A public system with over 2,000 beds, affiliated with the University of Miami Miller School of Medicine, JHS has been overwhelmed for years by its mission to help the uninsured.

It was clear that without additional margin, there could be no mission. And thus was born an initiative to use fundraising to create a world class international health program. As the former President and CEO of Jackson Memorial Foundation, I had the privilege of leading this program’s development from start-up to almost $100 million in annual revenue. How did we do it?
‍

At Jackson, the hospital’s existing public-hospital culture and lack of funds stood in the way. JHS’s mission was to provide a single standard of excellent care for all those in need, rich and poor alike. Creating an exclusive VIP care program for foreigners seemingly ran counter to its core mission principles. This was clearly a project that had to be incubated in a different way. The hospital’s foundation took the task on.
‍

The initial drive came through a board member with great experience in the international health insurance business. With his help, the hospital’s CEO was encouraged to take a look at the potential for creating an expanded international department.

To get things started, the foundation agreed to provide the seed funds for an independent business analysis and marketing plan. Outside consultants (KCI Partners, Inc.), with whom I now am associated) were hired and a small group of foundation board members were recruited to work with the consultants and management staff.
‍

Two studies were conducted which defined the market opportunity and identified challenges, and which were then used to educate the hospital’s trustees and management. After almost five months and various presentations, the Trustees gave the green light for a pilot program, and provided enough operational funding from the hospital to hire basic staff. The initial investment by the foundation had paid off: we now had a start-up program which could be rolled out and tested.
‍

But the studies also revealed several challenges which needed “fixing”. First, was the lack of a dedicated concierge system for international patients. Without such a system, the program would certainly fail. Second, it was clear that although the medical care at JHS was world-class, the facilities didn’t look it. Facilities had to be upgraded in order to compete with other international hospital programs. The foundation committed to seek the donations needed to overcome both of these obstacles.
‍

Our first step was to recruit an experienced customer service “concierge”. Our board champion helped recruit this individual, and also committed to personally funding her salary for the first 6 months. Our new Hospitality Director quickly realized that the hospital was unprepared to meet the needs of international patients.

For example, she encountered one Argentinean patient who had flown in to admit his seriously ill wife, and who now sat crying in frustration after three hours of waiting because the hospital had not received the correct approvals from their insurance plan, the physician hadn’t been notified of their date of arrival, and the hospital was not ready to admit his wife. A plan of action was developed and implemented to overcome these serious service issues. Systems began to change.
‍

Next, a commitment was made to create a classy, upscale “international home” in the heart of the hospital – a place where patients could be admitted and families could be served while waiting. But how could a public hospital dedicated to helping the needy, and suffering from routine underfunding, create a fancy VIP center for foreigners who required VIP service and surroundings?

The answer came in the form of a one million dollar donation to create what is now known as the “BUPA Center”, a 2,000 sq. ft facility designed to look like an upscale airport lounge and which provides internet access, faxes, showers, waiting rooms, and even a small clinical area for exams.
‍

Now the program had a home, a presence, and a place from which to grow. It had a visible brand, made possible through the $1 million gift, and the planning and generosity of board members and donors.
‍

Next came the patient rooms. How could we recruit patients from all over the world, only to have them stay in standard rooms? Again, the foundation created a program that persuaded donors to dedicate VIP rooms. Ten initial rooms were renovated, at a cost of $100,000 each. These became the heart of the international program, and of course, became the rooms most in demand in the entire hospital!
‍

By the one-year mark, international patient volume had doubled and the value of the investment was obvious. A growth plan and a second-year operational budget was finally approved by the hospital’s Trustees for a permanent program.

The brand “911 of the Caribbean and Latin America” was developed, featuring critical care as the primary focus of international care. Other investment needs were identified, including developing a dedicated international case management team, and a 24/7 intake office and process. But by this point, the hospital had sufficient evidence to justify an increased operational investment that would increase revenue.
‍

But still the foundation was not finished. It had previously funded a program which sponsored children who needed life-saving care at Jackson’s Holtz Children’s Hospital but who could not receive the necessary treatment in their home countries.

This program – the International Kids Fund – was now linked to the hospital’s new international program, providing a soft and caring image to our clients regarding the true role of Jackson Memorial Hospital. Philanthropy and the business of healthcare joined hands, to the benefit of all involved.
‍

The program began with only $13 million a year in revenue, largely from those international patients finding their way to JHS, despite the lack of focus and many obstacles. The initial funding by the foundation’s donors seeded the program, and created results that far exceeded initial projections.

Through philanthropy, careful planning and a dedicated staff, it grew to almost $100 million dollars in revenue per year, in only four years. This was all made possible due to the influence, investment and motivation of those who wanted to make a lasting difference to the hospital’s mission, and those who were willing to provide the gifts that made a wonderful international program come to life.
‍