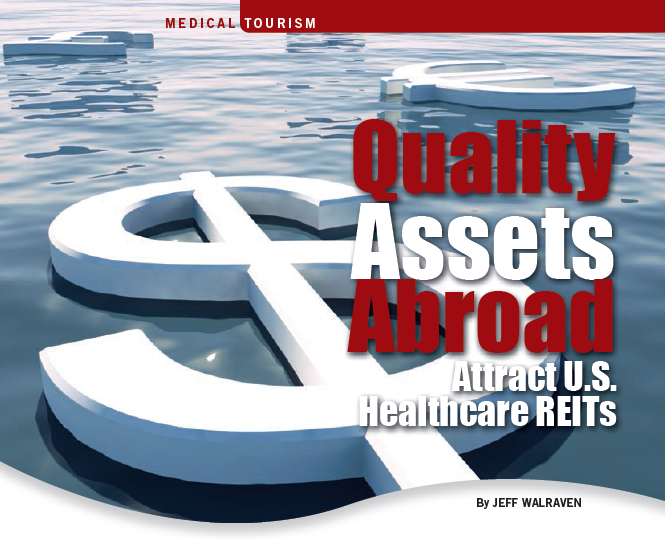 A trend indicates that U.S. healthcare real estate investment trusts (REITs) are diversifying their portfolios by investing in foreign real estate markets. In independent transactions since May 2013, three U.S. healthcare REITs purchased more than 100 healthcare properties in Canada, Germany and the United Kingdom. In doing so, these large-cap REITs are establishing an international presence, while adding to their already hefty domestic-based portfolios.

There are likely several contributing factors to the uptick in U.S. healthcare REITs acquiring foreign assets. However, in equal measure, the most prominent factors are the current climate of the U.S. healthcare real estate market and that of foreign countries.
‍

Large-cap U.S. healthcare REITs have sufficient capital to make acquisitions. For example, according to Seeking Alpha, there are three companies within close reach of the $20 billion market capitalization: HCP Inc., Ventas, Inc., and Health Care REIT, Inc. (HCN). Thus, it’s not surprising that they are looking at acquisition targets.
‍

In addition to their U.S. pipeline, HCN is looking to plant feet in rich soil overseas, where quality assets are becoming available. In a recent Senior Housing News article, Scott Brinker, HCN’s executive vice president of investments, indicated that the REIT targeted both Canada and the United Kingdom as growth markets some years ago.

This is a result of the anticipated doubling of the senior populations in those countries, according to the article. Their recent acquisition of approximately 47 senior housing communities in a $1.01 billion investment in Canada is further proof that they see opportunity abroad.
‍

A REIT may also be more inclined to seek international growth opportunities when prime domestic acquisition targets are less abundant. Such activity may be able to further shareholder distributions that otherwise could have been impacted from slower U.S. growth. Additionally, foreign assets may offer the benefit of being slightly below market price today with the potential to increase over time.
‍

There are three companies within close reach of the $20 billion market capitalization… thus it’s not surprising that they are looking at acquisition targets.

Another example of a U.S. healthcare REIT taking advantage of sound healthcare real estate markets overseas is Medical Properties Trust, Inc., which entered into an agreement with hospital operator RHM to acquire 11 hospital facilities in a sale/leaseback transaction valued at $244.7 million earlier this year.

In a recent release issued by Medical Properties Trust, Inc., chairman, president and CEO Edward K. Aldag, Jr. said, “This investment will allow MPT and its shareholders to benefit from the stable German economy, favorable demographic trends and the operational expertise of RHM, all of which we expect will help drive FFO (funds from operations) growth.”
‍

A follow-up question might be surrounding repercussions of this trend for domestic properties looking to be acquired by U.S.-based REITs. Thus far, there has not been any notable direct impact on the domestic healthcare real estate market.
‍

However, an influx of acquisitions of foreign assets could lead to competitive pricing pressure, if U.S. assets are overpriced and foreign assets are either fair or under priced. In such a case, U.S. sellers may lose an opportunity if REITs choose to deploy the capital it has on the better priced foreign asset versus the more expensive domestic one.
‍

Thus far, we have seen U.S. REITs acquire properties in Canada, Germany and the United Kingdom including Birmingham, Bristol, Oxford, and six facilities in Scotland. U.S. REITs that have already acquired foreign assets may be looking to deepen their international footprints, and those with strictly domestic portfolios might be considering venturing overseas.

In either situation, the discussion of potential emerging markets is relevant. In addition to familiar markets like Canada, Germany and the UK, budding markets include locations in China and, perhaps, other BRICS countries (Brazil, Russia, India, China and South Africa) where there is newly advanced economic development.
‍

The symbolic acronym BRICS represents countries with a rapidly developing economy. As heightened attention has been fixed on BRICS countries in recent years, a great deal of exploratory activity in those areas has taken place by U.S. healthcare REITs, along with many other business entities looking to these emerging markets for opportunity and to snatch up first-rate asset acquisition targets.
‍

For centuries, multigenerational housing was the societal norm in China. Recent developments, however, have marked a stray from this tradition, with approximately 40 percent of the senior community in facilities, according to the Urban Land Institute. Additionally, the Urban Land Institute noted that, as of 2012, there were 178 million seniors (those over the age of 60) in China, with more than 11 percent over 80 years old.

The demographic forecast indicates that this number will climb to 450 million by 2050. One impact of both the large aging senior population and the filial shift is the prospect that together they will lead to a need for increased senior housing real estate development and, thus, provide a growing number of acquisition targets.
‍

U.S. healthcare REITs could be resistant to investing in overpriced domestic assets, or desirable domestic acquisition stock simply may not be available, leading to a need for global exploration. Industry professionals should be paying close attention to the economic conditions and societal shifts in BRICS countries, along with the population growth of the elderly, as they determine which markets have the most upside potential.

Additionally, REITs may continue to seek growth opportunities in the UK and Canada, where growth profiles and, consequently, senior housing markets are comfortingly comparable to that of the United States.
‍

While we have seen only a handful of U.S. healthcare REITs establish an international presence, the trend has potential to be long-term, as the U.S. REIT population is now awakening to the availability of foreign assets.

As REITs are seeking to expand their pool, looking beyond American borders may become more prevalent. If U.S. healthcare REITs continue to have access to deployable capital, the trick will be for foreign entities to demonstrate facility and operating superiority.
‍

Jeff Walraven is an assurance partner with the national real estate practice of BDO USA, LLP. Throughout his more than 21-year career in public accounting, he has provided assurance, business operational and tax consulting services for public and private clients. He focuses on servicing clients in the real estate sector.

He has a B.S. in Financial Management from Bob Jones University and a Masters of Professional Accountancy from Clemson University. He can be contacted at jwalraven@bdo.com.