Setting Yourself Apart in the Exhibit Hall 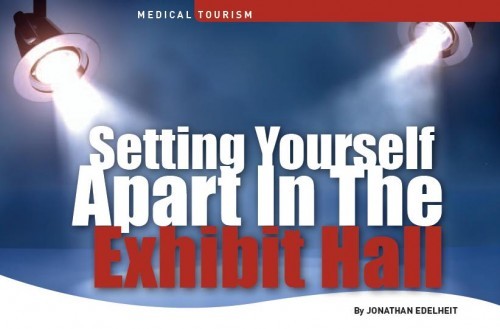 Exhibiting your company or industry at a conference is your chance to market your brand and tell thousands what you’re all about. Learn how to avoid common mistakes some make and learn the tips to succeed at these events. After all, you only have one opportunity to make a good first impression.

‍
Exhibiting at a conference is one of the most important ways to brand your company and the products and services that you offer. Many of you have done it yourselves, or have colleagues at work who attend to your companies’ exhibit booth at conferences and trade shows.
‍

I’ve been doing it for over 10 years at over 50 conferences and conventions, from small ones with 200 attendees to mega conventions with over 20,000 attendees. This is where usually once per year, in a certain industry at a specific industry trade show, you really market your company and have the opportunity to meet many new prospects and clients. Normally, at a trade show you can accomplish the same prospecting that would otherwise take you six to twelve months of emails and sales calls from your office.
‍

Clearly, exhibiting at a trade show is therefore one of the single most important marketing campaigns and tools your company has at their disposal for growth and bringing on new clients and keeping existing clients happy.
‍

How to Make a Good Impression

Years ago, booths were very expensive, but today you can get a very professional booth backdrop with graphics that can cost only $1,000. Luckily, display isn’t really a problem, because most of us have invested and have very professional booths. There are only a handful of companies you will see at a conference that have a bare booth with no graphics or stands.
‍

The second impression of your company at a trade show or conference is your booth staff. In my opinion, this is where 60 percent of companies go wrong. Please pay attention to that large number. I believe 60 percent of exhibitors lose out on potential prospects and new business because either their exhibit booth staff was not trained properly or the wrong people were chosen to work their booth.
‍

My personal belief is that 70 percent of problems at the exhibit booth are because lack of proper training for the exhibit booth workers, and 30 percent is simply choosing the wrong people who should never be sent to a conference to represent a company.he first mistake that is made at the exhibit booth is booth personnel who don’t talk to attendees or try to attract them to their booth.

They try a passive approach, hoping that attendees will see their booth, be curious and just want to stop by and engage them in conversation. This happens 5 percent of the time at most conferences. With many conferences having over 100 booths, attendees don’t have time to spend at every booth. If they spent five minutes at each booth, this would be over eight hours of talking to exhibitors. It’s not going to happen.
‍

Many booth workers are not even trained to give a short sales pitch to attendees. You need a 60 second elevator pitch to interest attendees into staying and talking to you. But most companies assume an employee knows their organization and that they will just represent them well. This is like throwing your exhibit booth workers to the wolves. They need to know who the exact audience is for that conference and tailor a 60 second elevator pitch to that audience.
‍

Here are some helpful hints to maximize return on investment:

‍
One of the most important things is to have one motivated team leader at the exhibit booth that will keep your booth staff motivated and focused. Maximize your time, as you don’t have much of it in the exhibit hall. Also, don’t make the mistake that many do about the fear of “divide and conquer.”

This happens when one booth worker is talking to an attendee and they bring in a co-worker to help with the discussion. Then they don’t realize they are no longer important to the conversation because their co-worker is handling the delegate, but they stay there not realizing this, and while they are standing, there are ten to thirty or more attendees walking by the booth with no one engaging them.

‍
Far worse, and I see this happen all the time, is other attendees come to the booth to get information, and the employee feels it will be rude to excuse themselves and talk to another attendee and so they don’t. So, many leads get lost this way at conferences. A simple, “excuse me” and ducking out while your colleague continues the conversation is totally professional, acceptable and expected by the attendees.
‍

What’s the famous saying, “three’s a crowd?” Remember that in the exhibit hall.
‍

Poor planning is also another reason a company can fail when exhibiting at a conference. Giveaways are a very inexpensive way to draw people to your booth, but often many exhibitors handle this situation in the wrong manner.
‍

I use an IPOD giveaway and sometimes a Wii giveaway. Considering that the costs of going to a conference for a company can be $5,000 to $20,000 or more, spending $200 for an IPod or $250 for a WII is a drop in the bucket and pennies on the dollar. Yet, almost no one does this. It amazes me that people don’t know what a draw the prize giveaways are.
‍

Giveaways are not just about collecting business cards. Some exhibitors simply ask for business cards, but say nothing to the attendee. They feel they will follow up with them later, which is a lazy approach. The prize giveaway is the draw in that gets that attendee to visit your booth, who otherwise might have walked passed it. This is the opportunity to engage the attendee in conversation, to find out what they do, how they are a prospect for you and for you to offer your 60 second elevator pitch.
‍

Now, you have detailed information that you can write on their business card, so you have relevant facts as to why you are following up with them and what interested them about your services.
‍

I was at a recent conference in Orlando, Florida where the booth next to me waited until the last day, which is usually the slowest to give away their best items, flash drives, which can cost from $5 to $15. They put them out on the exhibit booth table and let people walk by and take them without talking to them or even asking for a business card. In one hour, I saw these people waste hundreds and thousands of dollars in flash drives.
‍

I see time and time again people who are either not personable, don’t know their companies products or simply don’t care whether the company gets any business. My favorite examples are the employees for companies that put their chairs in the back of their exhibit booth and during the whole conference never get up once and never talk to people. They look miserable and unapproachable and no one stops by their booth.
‍

If the conference hall is open for two to three hours per day or in breaks, there is no reason your booth staff should ever be sitting, unless they have a medical condition. I don’t work the inside of my booth, but the outside. I actually stand outside my booth in the walkway so that I can easily engage people in conversation and then draw them into my booth and so that I am not blocking my booth or blocking people from entering it.
‍

My all-time favorite, which happens at every conference I go to, is there is always one booth where the employees setup their booth and then never return to the exhibit hall. Maybe they’re out visiting friends, engaging in the tourism of the town the conference is being held in, or who knows.

They stroll into the conference once per day, nonchalantly, to add some brochures to their table and then leave. If only the big dogs knew what the little dogs were doing, I don’t think they would be too happy. Also, it amazes me how many times I stop by major companies booths at conferences to ask about specific products or services they do and the booth staff does not know what they are talking about.
‍

The worst nightmare is for a delegate to stop at a booth and the product I am asking about is printed in huge letters on their exhibit booth, but the booth attendants don’t know about it  or who at their company deals with that product.

Is it possible that the companies that are sending out their employees to represent them for specific products don’t know anything? It’s surprising when these employees don’t even offer to try to find someone at their company who knows about that product and get back to you after the conference.
‍

60 percent of companies spending all this money sending employees to a conference and all the costs of brochures, exhibit booth stands and more, not knowing that they may have well put their money in a paper shredder instead.
‍

Think about the cost of going to a conference. If you purchase a $5,000 booth and then fly two employees out to the conference and their airfare and hotel for 3 nights is another $3,000 to $4,000, plus costs of printing and shipping brochures, printing banner stands or booth layouts. It is very easy to spend at least $10,000 or more for each conference you go to.
‍

My advice is to handpick your employees that you send out to a conference, and before they go, spend several hours training them on what to say, and how to respond to certain questions. Turn them into an elite team whose sole focus is to be aggressive at the conference, but in a very friendly manner and to focus on getting leads, but even more importantly, getting quality leads.
‍

Have good giveaways like an IPOD or WII, a nice booth layout and brochures. Create a plan of attack and execute it. Also, if you are sending employees to a conference to exhibit, make sure they are meeting your goals. For those companies that are not doing a good job of representing themselves at the conference, it’s not the fault of the exhibit booth workers, it’s the fault of the executives of the company, who either have not done proper planning, training or are sending the wrong employees to represent the company.
‍

Think through your plans for exhibiting at conferences because these are the once a year opportunities to maximize the success and growth of your company.

Jonathan Edelheit is CEO of the Medical Tourism Association with a long history in the healthcare industry, providing third partyadministration services for fully insured, self-funded and mini-medicalplans to large employers groups.