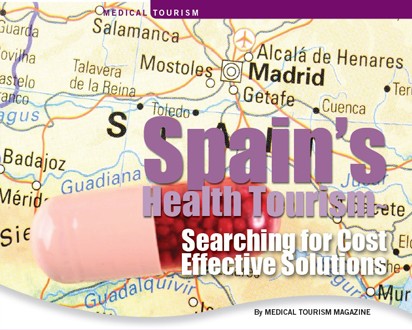 Spain’s Health Tourism industry is booming, but perhaps not in a good way. A debate is ensuing within the Ministry of Health about the industry’s finances and about how to properly regulate costs from foreign visitors.

As a member of the European Union, Spain serves many patients from member states. However, the health ministry is concerned that the country is unable to invoice many of the services provided to thousands of foreign patients.

In 2009, treatment for about 700,000 medical tourists cost about €1 billion, according to data from the ministry taken from a Tribunal de Cuenta report.
‍

As reported on typicallyspanish.com, these are patients from the EU who have either a Spanish Health Card or a European Health Card, which passes the costs on to Spain. These patients all have a right to get treatment in the country, and Secretary General of Health Pilar Farjas told the Spanish newspaper ABC that the government will continue to guarantee and provide medical services to those who are legally allowed to have it. She said the health department is trying to figure out why the financial imbalance exists.
‍

One reason the ministry gives is the absence of article 7 of the European Directive 2004/38/EC, which outlines the ways in which to prevent citizens of one country from abusing the healthcare system of another country.

The article establishes that EU citizens have the right to residency in a member country for more than three months if he or she is employed or self-employed in the new country or if “he or she or the members of the family have sufficient resources to not become a cost for social assistance to the new member state during the period of residence, with health insurance which covers the risks of the adopted country.”
‍

Spokesman for Health in Congress Manuel Cervera told Radio 9 that the government is investigating other ways to better control medical tourism and to limit foreigners’ access to health services, including creating new criteria like a minimum period of residence or tax contributions.
‍

It is also asking the European Commission to ensure the proper free movement of people and services within the EU. Farjas recently commented on a British Embassy  guide and commented that the Spanish government is looking into any fraudulent behavior.
‍

The ABC paper criticized the British charity Age Concern, saying that it has been providing information to British people and other foreigners about how to get the most out of the Spanish healthcare system.
‍

Following the remarks, the British Embassy released a statement in Spanish on its website saying that the British government in no way promotes or approves of health tourism. Rather, the provided advice is to educate British citizens about their rights regarding overseas medical treatment.

The statement also remarks that British citizens have the same rights to Spanish healthcare as Spanish citizens have in England. “The advice we give in our web page clearly establishes that the European Health Card does not cover those people who travel to Spain with the concrete objective of undergoing a medical treatment.

The objective of our advice is to ensure that those who use the system do so in line with Spanish legislation, which includes the need to register on the Padrón census.”
‍

More than 13 million British citizens travel to Spain every year, representing about 24 percent of all tourists in Spain. This accounts for €10 billion a year, or 1 percent of Spain’s GDP.
‍

According to the Medical Tourism Corporation, the British and Spanish health systems are fairly similar. Though a few differences exist, both public systems offer basic healthcare to all people and provide the option to upgrade to private insurance.
‍

For many years, Spain has been a major destination for travelers and medical tourists alike. It has more than 750 hospitals, 1 million beds and 450,000 doctors and nurses. They perform 2.4 million surgeries a year in the areas of orthopedic, elective, cosmetic, eyesight and obesity, a fact that attracted millions of medical tourists last year.

The World Health Organization has ranked Spain seventh in the world for the best healthcare system and reports that the Spanish are the second-most satisfied with their healthcare quality.
‍

The Medical Tourism Corporation sites that the price for treatment depends on the surgery, but costs are usually 30 to 70 percent cheaper than in other parts of Europe and often half the price of surgeries in the United States.
‍

Farjas said that is why the country attracts so many foreigners from Europe and around the world. The country is proud of its quality healthcare, but now, it just has to figure out the best way to manage the financial burden that has stuck itself in the health tourism’s suitcase.