Stem Cell Therapies Beginning to Come of Age in Philippines 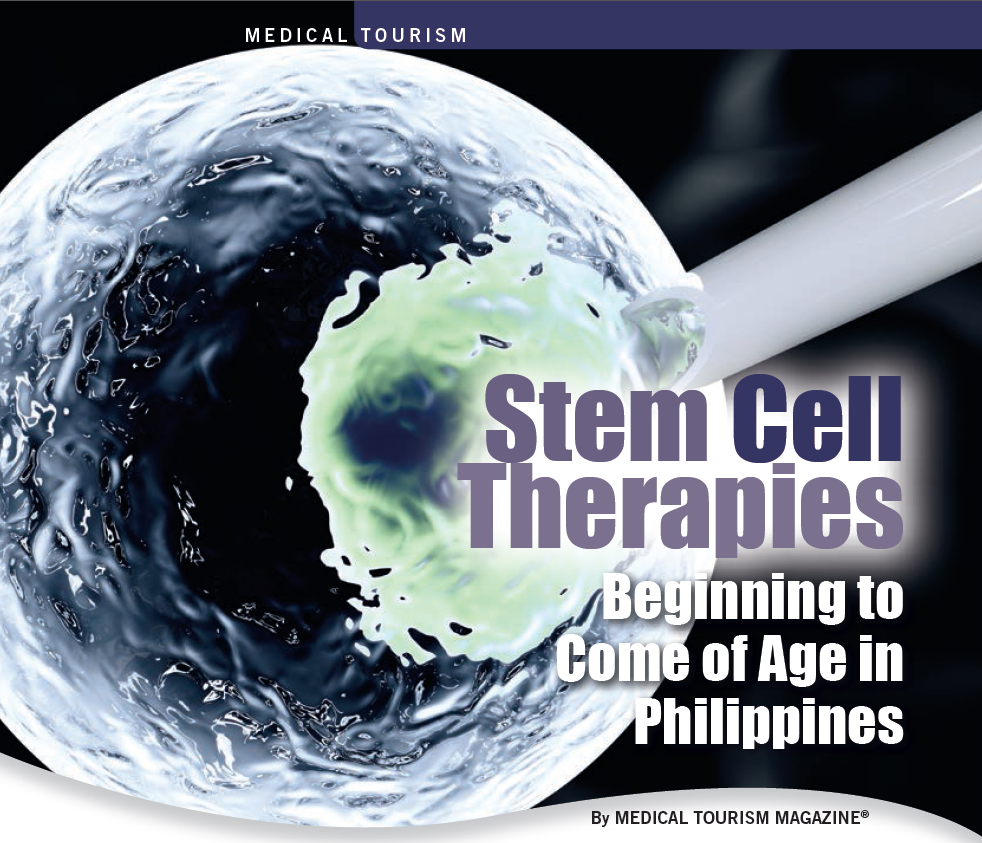 Looks can be deceiving. Ask those who have glanced at Cynthia Carrion-Norton flitting about the Philippine capital, highheels in toe, belying energy beyond the years she so successfully masks.

Like some fellow “sixty somethings” in Manila, this 66-year-old credits her vitality and youthful appearance to a controversial treatment that involves harvesting stem cells from her own fat and injecting them into her blood. Carrion-Norton, a member of the Philippine Olympic Committee and a former undersecretary for medical tourism, likened her therapy to being injected with intravenous fluid in the arm.
‍

“The day I got the therapy I went to a dinner party and everyone told me, ‘Cynthia, you’re blooming!’ “ Carrion- Norton told AFP.
‍

In a country where many elite are obsessed with the natural aging process, wealthy Filipinos are shelling out between $12,500 and $18,000 per session of stem cell therapy in the belief the treatment will improve their overall health and make them look younger.
‍

Rich businessmen and public officials — mostly male — are the most eager customers, according to Florencio Lucero, a doctor in Manila who began performing adult stem cell therapy in 2006.
‍

“They do it because they want to work longer,” said Lucero. “And then they tell their wives or girlfriends.”
‍

Thai medical entrepreneur Bobby Kittichaiwong has a lucrative business catering to the Filipino elite, who pay $20,000 to visit his Villa Medica clinic in Germany for a more controversial form of stem cells harvested from unborn sheep and later injected into a patient’s muscles, known as fresh cell therapy.
‍

“After 14 days, the patient’s skin will glow and their digestive and immune systems will improve,” said Kittichaiwong, who treated 400 visiting Filipinos last year.

Among Villa Medica’s high-profile clients is former president Joseph Estrada, 76, who has staged a remarkable political comeback in recent years after being forced to step down from the nation’s top job in 2001 because of corruption.
‍

“Now I sleep better, my knees are no longer a problem, my skin has been radiant like this ever since,” reads a testimonial from Estrada in a Villa Medica brochure.
‍

Some believe stem cell treatments are the future of medicine. Others say stem cell research has already yielded historic breakthroughs against incurable diseases. And that’s just the start, said researchers this week at the World Stem Cell Summit, in San Diego, who described progress against cancer, diabetes, HIV and other illnesses.
‍

Some believe stem cell treatments are the future of medicine. Others say stem cell research has already yielded historic breakthroughs against incurable diseases.

“We’re not talking about the future, we’re talking about things that have already happened,” said Dr. Catriona Jamieson, a blood cancer specialist at the University of California at San Diego, which recently shared stem cell initiatives among others as a member of the Medical Tourism Association® and sponsor of the 6th World Medical Tourism Congress & Global Healthcare Congress, in Las Vegas.
‍

Jamieson, who has used stem cell research to identify new cancer treatments, is now working on a drug to halt the growth of cancer stem cells, those that often survive treatment and cause the regrowth of a tumor.
‍

Other researchers have described progress in their fields. Scientists at Brigham and Women’s Hospital and Massachusetts Institute of Technology are hoping that their successfully grown intestinal stem cells can be coaxed to develop different types of mature intestinal cells. For those living with gastrointestinal disorders, such as ulcers or Crohn’s disease, treatment often means quelling uncomfortable symptoms through medications or dietary changes.
‍

Human stem cells have also been converted into functioning lung cells for the first time, paving the way for better models of lung diseases and ways to test potential drugs. Imagine researchers taking these cells to create tissues for lung transplants and an assortment of other aliments?
‍

A number of Americans are finding out, not in the United States, but in places like Panama and Costa Rica where cutting edge experimental treatments using stem cells are offering dramatic results. However, before stem cells therapies take hold of patient imaginations, doctors are urging patients to think twice before choosing stem cell therapies; even in the Philippines, where the rich and famous have made ringing endorsements.
‍

The use of stem cells from sheep has attracted much of the recent criticism. Samuel Bernal, a professor of medicine at the University of California is among the many Filipino doctors to warn of the dangers of animal cells.
‍

“When animal cells are transmitted to humans, it could be fatal,” he said.
‍

“What you eat every day is foreign material, but you don’t get rejection,” he said.
‍

In the meantime amid the debate, Carrion-Norton wants to promote the less controversial adult stem cell therapy in the Philippines, and set up her own clinic.
‍

Treatments at Norton’s clinic will start at about $17,000, but she believes those prices will drop when more opportunities become available.
‍

“Cynthia has long been synonymous with top-of-the line treatments and the highest levels of patient safety,” said Renée-Marie Stephano, President of the Medical Tourism Association®. “She is a trusted ambassador behind connecting patients – both in her native Philippines and around the world – with affordable medical care they desperately need and deserve.”
‍

Stem cell therapy for health and cosmetic purposes is popular in China, India and many other Asian countries. However, like the Philippines, laws and enforcement are in large part yet to catch up with the medical advances.
‍

In an effort to tap into the much larger markets of the Philippines’ lower and middle classes, advertisements for more affordable products and treatments claiming to use stem cells have been springing up. Stem cell pills claiming to make customers “feel and look at least seven years younger” can be bought through Filipino websites for just $200. Inexpensive and top-end beauty centers also offer a range of treatments, some not involving qualified health professionals.
‍

Human stem cell procedures can indeed offer life-saving treatments for patients with leukemia, lymphoma and some solid tumors, according to the American Medical Association. The U.S.-based International Society for Stem Cell Research also said the procedures for human, or adult, stem cell therapy had “tremendous potential” for treating a range of human afflictions.
‍

But, the organization warned clinics around the world were offering “unproven treatments” for many illnesses that posed “very real risks of developing complications.” Stephano said the lack of regulations in the Philippines might expose a desperate patient to a less than ideal situation.
‍

“Patients need access to accurate information detailing the doctors and medical institutions that are accredited to perform stem cell procedures,” she said. “Patients contemplating stem cell therapy should educate themselves on both the benefits and the potential associated risks, and speak with their doctors to learn more about the effectiveness of the treatment – just the way they would with any other medical procedure.”
‍

The Philippines government, with an eye toward an economic boon from stem cell treatments, says hospitals and doctors are on a path toward establishing regulations and to make practices transparent to patients.
‍