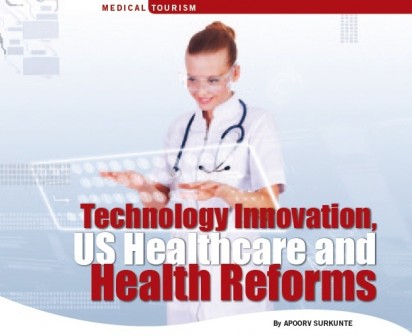 Over past couple of decades, banking industry witnessed technology innovation in the form of credit cards, ATMs and online banking which substantially reduced administrative costs and made banking simpler for end user. The innovation in chip technologies enabled hardware industry to bring down cost of computers which lead to higher demand and reduced cost for the industry.

Bookstores went online and companies like amazon brought down the cost of books by cutting down entities involved in the supply chain. There are numerous such examples across various industries where technology has played key role.

However, technology innovation has not worked as well with US healthcare industry as it did with other industries; it is one of the reasons why America spends 17.2% of GDP or about $2.5 trillion on healthcare. The healthcare expenses have been growing at significantly higher rate than inflation. U.S. healthcare system stands last for its performance among seven industrialized nations, despite spending the most, according to a new Commonwealth Fund report 2010.

Technology innovation has not succeeded in improving US healthcare the way it did in other industries and the actions being taken by federal government to promote Healthcare IT.
‍

1. Slower Adoption of technology: Implementation of innovations that could bring down costs has been slow in US healthcare industry. Implementation of Electronic Health records is one such example. Partial to full penetration of EHRs in European nations such as Norway, Sweden is about 90 % whereas it stands at meager 23% in USA, according to a report. Administrative efficiencies could be achieved with innovations such as Real time claims adjudication and ICD 10 implementation.

CMS report suggests that hospital productivity gains have been “small or negligible” over the past quarter century.  The usage of basic communication medium like E-mails also is not widespread between patients and doctors. Usage of smartphones in healthcare is catching up, however it still has long way to go.
‍

2. Higher Costs of Technology: Due to patent protection laws, manufacturers need not worry about price competition when they launch new medical equipment/drug; emphasis is on recovering the costs before patent expires. Insurers do not have enough bargaining power to negotiate lower prices on these costly treatments. Because of this, technology drives up the healthcare costs.
‍

3. Consumer price insensitivity: Once members pay the premium, there is decreased motivation to opt for drugs, treatments that cost less as members tend to believe that costlier treatment is better. Costlier treatments and equipment are demanded by patients and physicians on the grounds of quality. Cost of new technology consistently accounted for 20 percent to 40 percent of the rise in health expenditures over the past forty years. Perverse incentives like this push the healthcare costs up despite innovations happening in the system.
‍

4. Limited incentives for doctors / hospitals for cost reduction: Many of the technology innovations have not lead system efficiency or reduced healthcare costs. On the contrary, Congressional Budget Office estimates that an astonishing half or more of the increased spending on health care in past decade is due to technological, surgical and clinical advances. An article in The Journal of the American Medical Association points out that simple surgery that eases pressure on the nerves has been replaced by complex fusion surgery to relieve lower back pain. Surgeons were paid 10 times as much for the complex surgery, hospitals were paid three and a half times as much, and manufacturers made $50,000 worth of implants for the complex surgery compared with little or no profit from the simpler fusion surgery.
‍

6. Lack of innovation in chronic disease prevention: Prevention is the key to both better health and lower healthcare costs. One third of American population is overweight (about 97 million people) and America spends whopping 75% on chronic diseases which can be prevented to large extent by closely working with consumers. However the focus is more on disease care rather than on preventive care. According to a recent New England Journal of Medicine article, over 2 million Americans die due to preventable reasons like smoking, high blood pressure, obesity, diabetes etc. United Health Group estimates that Diabetes may cost America approximately $3.4 Trillion in the next 10 years. Improper eating habits and unhealthy lifestyle are prime reasons behind these problems. Innovative ways to promote prevention may go long way to bring down healthcare costs. Solutions need to be introduced and implemented to involve all stakeholders and push consumers to lead healthier lifestyle. Health 2.0 technologies could go long way to promote healthier lifestyle.
‍

7. Defensive Medicine costs: In many cases, physicians opt for comprehensive treatment that include extra tests and scans to make sure that they don’t have to face litigation for medical malpractice. This practice of defensive medicine costs $55.5 billion to US healthcare every year according to a study. Doctors also pay hundreds of thousands of dollars a year in malpractice insurance. These expenses can be limited to an extent with Electronic Health records implementation.

8. Failure in reining the inefficiencies: Significant innovations are required to rein in the key areas of system inefficiency such as administrative inefficiency, Provider errors, lack of care coordination, unnecessary care, fraud and abuse etc. $40 billion of costs could be saved in the U.S. health system in terms of inefficiencies reduction with implementation of EHRs, according to Mckinsey report. Fraud and abuse are prevalent, more prominently in Medicare. Healthcare costs would be significantly lower (A Thomson Reuters report claims that almost $700 billion are spent in wasteful spending and significant chunk here can be saved) with innovations in this area which has not happened so far.
‍

Federal government is pushing the changes which would enable Healthcare IT to usher into new era where technology would simplify healthcare with big ticket implementations such as HIPAA 5010 changes, ICD 10 implementation, Grants of $19.2 Billion to address the meaningful use of health records and privacy / security concerns associated with the electronic transmission of health information as part of ARRA act of 2009.
‍

PPACA act of 2010 has outlined various changes with regards to healthcare IT. The proposed changes include implementation of health benefit exchanges, promoting administrative simplification with enhanced interoperability, promoting new models such as Accountable care organizations which would need various technology innovations ( Remote health monitoring, telemedicine) to be successful, creating Innovation Center within the Centers for Medicare and Medicaid Services and performance bonuses for organizations that demonstrate successful implementation of HIT initiatives among other steps.
‍

The change that all these reforms are set to bring in would not be easy on stakeholders involved in US healthcare, however if Healthcare industry has to be transformed into an efficient one, this change is a bitter pill that the stakeholders would have to swallow!!
‍

Apoorv Surkunte works as Lead Business Analyst in Healthcare IT area with one of leading Health insurance companies in USA with experience of 7 years. His areas of interest include healthcare innovations, health reforms, Electronic Health records and ICD 10 implementation, health 2.0. Apoorv is certified project management professional (PMP) and possesses various international healthcare certifications from AHIP. Apoorv can be reached at apoorv.reddy@gmail.com