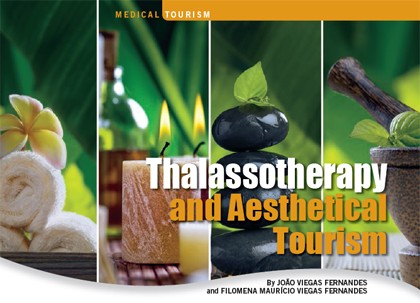 This article represents an attempt to understand the growing importance of scientific thalassotherapy around the world in health and wellness tourism. Thalassotherapy treatments can be used in articulation with conventional medical procedures under a paradigm of an integrative and holistic medicine

Nowadays, human beings are aware of the healing wonders of Mother Nature, namely the sea. The time spent near the sea/ocean enhances our ability to recover from injury, illness, stress and depression. The hospitality industry is providing thalassotherapy treatments in specialized facilities (spas or thalasso centers), to clients seeking health and wellness through nonmedical treatments.
‍

The denomination thalassotherapy is a neologism created by the French doctor Joseph de la Bonnardière, in 1867, based on two Greek words – thalassa (sea) and therapea/therapeuin (therapy).
‍

The preventive and curative benefits of thalassotherapy start from the similarity between seawater composition (92 different substances) and that of the human blood plasma. Seawater is a compound of elements (main salts and trace elements) in constant and stable proportions.
‍

The healing power of the sea was well known by ancient civilizations and by several religious traditions.
‍

In Africa, the Yorùbá religion (400 B.C.) venerated Yemayá as the goddess of the oceans. Yemayá is also venerated in Brazil, Cuba and Haiti. In Afro-Caribbean religion rituals, the mother sea divinity is associated to healing processes and spiritual cleansing.

In ancient Europe, Romans venerate Neptune and the Greeks venerate Poseidon as gods of the seas. Both civilizations use the healing powers of seawater. The Arabians introduce in south Europe, sacred sea baths between 710 and 1492 A.C. This tradition continued in Algarve and other Portuguese regions until the end of the 20th century.
‍

France is the pioneer of scientific thalassotherapy. The first seawater healthcare facility was established in 1778,
‍

The hospitality industry is providing thalassotherapy treatments in specialized facilities to clients seeking health and wellness through non-medical treatments.

in Dieppe. Dr. Joseph de La Bonnardière invented the word thalassotherapy in 1867. The French biologist René Quinton discovered the organic identity between seawater and the human being blood plasma, in 1904.
‍

The International Thalassotherapy Federation (Fédération International de Thalassothérapie Mer & Santé) was founded in France, in 1986, and a certification organization (Qualicert), in 1991. France was the first country to publish specific legislation about thalassotherapy in 1961, 1971, 1995 and 1997.
‍

Location on the seashore to benefit from the maritime (climatotherapy) climate.
‍

The marine environment is rich in seawater aerosols and full of healthy substances and negative ions. The negative ionization promotes the production of serotonin in human beings. Serotonin has relaxing and tranquillizing effects, helping to fight depression, stress and strains.
‍

Thalasso centers are located on coastal ecological preserves, no more than 800 meters from the shore.
‍

The seawater used in individual hydrotherapy treatments has to be pure fresh/live, without any treatment. To allow the osmosis of seawater minerals and trace elements into the human skin, the seawater should be heated to 34-36 degrees centigrade.
‍

The physicians prescribe treatment based on each patient’s specific requirements. The thalassotherapy treatment programs take place at least six consecutive days, with 4-5 treatments per day.
‍

This will ensure high-quality treatment standards and client safety.
‍

Thalassotherapy makes use of several equipments and treatments, such as:

• Nutritherapy based on algae, fish and seafood
‍

This harmony re-balances and restores the energy flow bringing about overall well-being.
‍

• Vichy shower (hidromassage with microjets. May also include a two- or four-hand massage)
‍

• And many other treatment options

Human beings are currently faced with major setbacks, such as anxiety, stress and depression. The fact that many are isolated from nature and other human beings aggravates the referred illnesses.

Thalassotherapy caters to basic human needs, such as physical touch, and offers a wide variety of hydrotherapies and massages aimed at physical and psychological well-being and strengthens the body’s immune system.

The efficacy of seawater hydrotherapies depends on the purity; temperature (approximately the same of the human body) and the length of time spent in seawater, at least 10 minutes are needed to facilitate the osmosis process.
‍

Thalasso Center Localization around the World

Health and wellness tourism is a composite touristic product, which includes thalassotherapy. The health tourism treatments are medically prescribed. The aim is to promote health and to treat specific diseases. Thalassotherapy can be articulated with conventional medical/aesthetical tourism procedures, either in the pre-operatory or post-operatory, under integrative medicine paradigm.
‍

In a holistic approach to health and wellness, the thalassotherapy treatments and therapies aim to restore the vital balance between body, mind and spirit (emotions and existential sense of life) toward equilibrium and a global health harmony. This harmony re-balances and restores the energy flow bringing about overall well-being.
‍

He is also the architect and advisor to Algarve Region Health & Wellness Tourism Cluster and Destination Branding. He is considered a visionary, pioneer and expert in health and wellness in Portugal. As a professor, he conceptualized a discipline in health and wellness tourism, which he teaches in the School of Management, Hospitality and Tourism, of Algarve University.

Filomena Maurício Viegas Fernandes is a medical doctor specializing in public health. She was the health delegate in several municipalities in the Algarve region and has been responsible for a number of programs on public health.