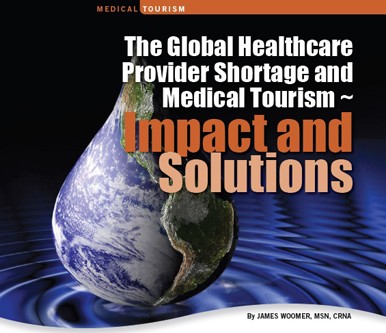 The current shortage of healthcare providers around the globe is a well-known and often discussed problem. In some areas of the world, particularly in developing nations, the shortage of physicians, nurses, technicians, and other providers is at critical levels, creating untold suffering, delays in receiving emergency care, and limited access to care.

Introduction to a Global Problem

The issue is not only quantitative; it is also qualitative, meaning that existing providers may not be functioning to the level necessary to meet the needs of the population. These concerns are not unique to the developing world alone.

What is becoming an issue for some countries is the potential impact that the medical tourism industry will have on their existing healthcare infrastructures, with some arguing that the provider shortage will only be worsened due to diversion of human resources and funding away from public healthcare and into the private sector.

It’s important to understand the dynamics at play and also of the possible solutions to the shortages that we face in the years ahead.
‍

Economic and population growth in the next decade will be centered in the Asia-Pacific region, India, and Africa. This growth will result in literally billions of people with newfound wealth and resources to spend on healthcare related services.

They will seek information that currently may not be readily accessible to them, in part due to the tremendous healthcare provider shortage worldwide. Consumers and professionals will need to utilize unique methodologies in order to meet this demand for healthcare and health information.
‍

As the developing world continues to feel the benefits of economic growth, the demand for healthcare information and services will drastically increase as areas of the world that could not afford to use precious resources on healthcare will now have the ability to focus on their health.
‍

The global ‘baby boomer’ phenomenon is a major factor in the increased demand for healthcare services around the world, with over 70 million baby boomers in the United States alone. This year, the first baby boomers began reaching retirement age.

Along with the acute diseases commonly found in the developing world, the aging global population will face chronic health conditions such as cancer, cardiovascular disease, and diabetes. These three diseases alone account for a staggering amount of the healthcare dollars spent each year.
‍

It’s no secret that the cost of providing healthcare is increasing precipitously around the world. OECD data from 2010 shows that healthcare expenditures account for:

In addition, the OECD reported that healthcare spending as a proportion of GDP grew rapidly from 2000 to 2008 in many OECD countries, with annual growth rates of:

It’s quite evident that these rising healthcare costs coupled with an increasing demand for healthcare services pose a very serious threat to the stability of the global healthcare system.
‍

What happens when rising costs and increased demands meet a decreased supply of providers? Consider some of these statistics:

Worse yet, if the goal of healthcare communities around the world is to have a similar nurse to population ratio as in the most developed nations of the world (1:100), it is possible that there could be a shortage of 50 million nurses globally.
‍

Admittedly, these statistics can vary widely. However, most industry experts concede that we are facing a significant shortage of providers, particularly nurses, while at the same time witnessing a dramatic increase in the demand for healthcare around the world.
‍

There are numerous factors to consider when examining the cause of the global provider shortage, including a shortage of nursing faculty, the migration of skilled providers, an aging population of providers, and unsatisfactory job conditions.
‍

A significant cause of this shortage is the aging nursing and physician population:

What does this global shortage mean for those in the medical tourism industry?
‍

As ever-increasing numbers of healthcare consumers seek more cost-effective solutions to their healthcare needs abroad, the issue of provider shortages is not left behind in their home countries.
‍

Specifically, the concern is that this growth may exacerbate any shortage of healthcare providers currently being experienced in the region and may actually increase the cost of healthcare in these areas due to the imbalance of provider supply with consumer demand. The concept is that this imbalance will further limit access to care for local patient populations.
‍

In addition, there is a concern that the growth of the medical tourism industry may be creating an unsustainable increase in the availability of expensive, highly technical healthcare services. The issue is complex and controversial, and it is unlikely to disappear from the debate.
‍

How is care to be delivered efficiently to a growing world population in the face of provider shortages, increased demands, and skyrocketing costs? These realities will drive consumers to seek less conventional options for seeking health information and healthcare services and will also force them to take more responsibility for their own healthcare.
‍

Expanding the Role of Nurses

In October of 2010, The Institute of Medicine released a landmark report titled The Future of Nursing, which called for fundamental changes in the role of nurses in the American healthcare system, including:

The recommendations in this report could be adopted internationally in order to implement needed changes to the way we deliver healthcare. Of significant importance is the ability for healthcare providers of all professions to offer their services in the global marketplace without artificial constraints placed on them by government bodies or competing professions.
‍

Advanced Practice Nurses (APNs) can play an important role in the global healthcare system by increasing access to healthcare services and improving the overall quality of care. Nurse Anesthetists, Nurse Practitioners, Nurse Midwives, and Clinical Nurse Specialists are highly educated nurses who can provide the intensely specialized care that patients with complex illnesses require and do so very cost-effectively.
‍

One example of the value of APNs to the global healthcare system is the use of Nurse Anesthetists. Nurse Anesthetists are APNs who receive special education, often at the graduate level, in the administration of anesthesia. They are used throughout the world in over 100 countries in various capacities, including the United States, Europe, Asia, and Africa.
‍

In the United States, Certified Registered Nurse Anesthetists (CRNAs) administer anesthesia to patients of every age and for every surgical procedure, from neonates to the elderly, and from cataract surgery to organ transplants. Their value to the healthcare system in the United States is undeniable.
‍

Nearly 45,000 CRNAs in the U.S. administer over 30 million anesthetics per year in all 50 states and in the U.S. military, working with surgeons, anesthesiologists, or independently.
‍

The rapid increase in the demand for healthcare services around the world is quickly surpassing the number of qualified providers. The expansion of the role of nurses and APNs around the world can assist in meeting these demands. Using Technology to Train, Educate, and Communicate

‍
The ability to leverage existing technologies and to incorporate future technologies into our healthcare system may provide some solutions to the problems created by the global healthcare provider shortage.
‍

What was once only possible in the realm of science fiction has now become a daily reality. Information and Communication Technologies (ICT) are being utilized across the globe both to manage and educate patients and to train healthcare providers who are thousands of miles apart.

These include methods such as the use of:

Hospitals have utilized video-conferencing systems to facilitate communication between healthcare providers and distant experts, and between patients and their physicians. Tele-ICU programs have been implemented in hundreds of ICUs around the United States and their use is spreading internationally.
‍

Healthcare professionals are managing patients across town and across the world, providing expert clinical care chronically ill patients through such mechanisms as virtual blood pressure and blood glucose monitoring. The proliferation of mobile devices, even in the poorest nations, now permits outreach to patients in remote areas of the world, enabling them to receive basic healthcare services and information that will improve their lives.
‍

When combined with distance education, these strategies have shown real promise in the battle to deliver care efficiently and cost-effectively, especially in the area of chronic disease monitoring and management. This can result in decreased hospital visits and an increase in patient compliance.

It has also been suggested that utilizing this technology may permit the transmission of new information much faster than traditional methods, enabling state-of-the-science standards to be implemented and make their impact early.
‍

The use of human simulation technology in the education and training of nurses may play a critical role in finding a solution to the international provider shortage. Simulation education can be used to target specific areas of need to:

Health 2.0 and the role of social media technologies are also rapidly growing in healthcare. For example, on February 9th 2009, surgeons at the Henry Ford Hospital in Detroit became the first people in the world to Twitter a surgery live as it happened.

During robotic surgery to perform a partial nephrectomy for renal cancer, itself an incredible use of technology in healthcare, the surgeons updated the family and the world on the progress of the case. Is this use of technology to communicate with patients and professional colleagues a passing fad? Unlikely.
‍

In the coming years, healthcare systems around the world will be faced with the challenge of delivering healthcare to a global population that has an increasing hunger for services and information. The global burden of disease, especially chronic disease, will place a tremendous strain on the ability to meet these demands.

Reliance on outdated care models will do nothing to solve these challenges and will serve only to exacerbate them. Fortunately, rapidly evolving technologies now allow multiple solutions to be implemented that can assist in the cost-effective and efficient delivery of healthcare.

Nurses and Advanced Practice Nurses are uniquely positioned to alleviate this crisis, enabling people of all socioeconomic ranks to have access to safe and affordable healthcare anywhere in the world.
‍

He has nearly two decades of clinical, academic, and business experience in the healthcare industry. He is a graduate of the Pennsylvania State University and the University of Pittsburgh Nurse Anesthesia Program, where he received the Agatha Hodgins Award for Outstanding Clinical and Didactic Achievement in December of 2000.
‍