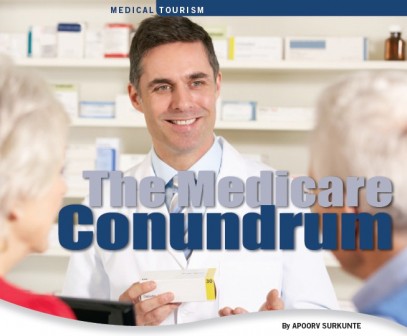 For decades, seniors have been looking forward to Medicare programs to address their healthcare needs. However, high rates of growth in national health expenditures are increasingly posing serious challenges to the financing of Medicare.

Medicare programs have been facing challenges in terms of rising healthcare costs, payment methods that could be more effective at bringing down costs, and delivery mechanisms.
‍

There is serious concern that Medicare may become insolvent for a considerable number of baby boomers when they reach 65 years of age who have paid into the system while working.

‍
The post-World War II baby boomers generation — approximately 79 million infants born between 1946 and 1964 – will start reaching age 65 starting in 2011 and continue to cross the 65 age mark over next 20 years. The Baby Boomer generation accounts for 26 percent of the total U.S. population and the number of beneficiaries is expected to increase by 3 percent annually.
‍

The government expects Medicare beneficiaries’ count to touch 80 million by 2030. Currently there are 3.5 people of working age supporting every retiree. The number of workers supporting retirees will decrease to 2.3 by 2030.
‍

At the same time, healthcare costs are projected to outpace inflation. Medical advances are extending lives which would further strain the program’s finances. Medicare programs are expected to cost $929 billion by 2020, from $504 billion in 2010.

Spending on the program is projected to expand from 3.6 percent of GDP in 2009 to 6.4 percent in 2030. Medicare’s current fee-for-service model has created inefficiencies and will lead to financial challenges. Medicare’s unfunded liability runs as high as $38 trillion over the next 75 years. By 2024, the program runs the risk of being entirely bankrupt.
‍

A study by economists Eugene Steurle and Stephanie Rennane of the Urban Institute show an average couple with combined annual incomes totaling $89,000 who retire in 2011 would have paid $114,000 in Medicare taxes, however the value of healthcare received by that same couple would be more than three times higher than what they paid in at about $355,000.
‍

The prospect of funding the healthcare needs of the growing senior population that is living longer and costing more is bound to put more pressure on the US government; which may have to reduce Medicare benefits, increase cost sharing, increase Medicare taxes or raise the qualifying age for Medicare benefits as Medicare programs becomes financially unsustainable.
‍

With the healthcare reform bill, President Obama has introduced measures to increase efficiency and reduce fraud in Medicare, reduce federal payments to Medicare Advantage plans and establish a new Independent Payment Advisory Board to recommend ways to reduce Medicare spending and include several payment reforms.

This bill is also introducing delivery system reforms which include a pilot program related to post-acute care, value-based purchasing for providers and the establishment of Accountable Care Organizations (ACOs).
‍

However, the federal government would need to do more than just these measures to counter increasing costs owing to the baby boomers population turning 65.
‍

Providing quality care to an aging population while keeping the program financially stable for future generation remains the key challenge U.S. policymakers are facing. Medicare is going to be one of the major issues during the forthcoming presidential elections.
‍

To save the Medicare system, Americans may end up working for longer, put up with   a system which may reduce their health benefits and the benefits of affluent seniors may be trimmed.

There are difficult choices to be made, and the sooner the government makes these choices, the better it will be for future generations of Americans who may end up paying greater amounts of their income in taxes to keep the Medicare system afloat.
‍

Apoorv Surkunte works as a manager with the leading IT services and consulting firm in the area of Healthcare IT.  Apoorv has over 7 years of experience in US Healthcare IT. His areas of interest include health reforms, healthcare innovations and ICD-10 implementation. Apoorv is certified a Fellow, Academy of Healthcare Management (FAHM) and a project management professional (PMP). He may be reached at: Apoorv.reddy@gmail.com .