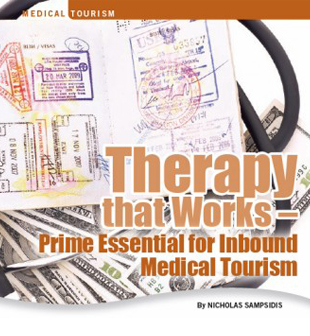 When Europeans were asked to rank reasons why they might consider traveling to another country for medical intervention, the top three motives funneled into one response: “Therapy not available at home that works.”

Such consensus leads to a soul-searching question: How many spas, hotels or sanatoriums, worldwide, have a functional program to remedy chronic inflammatory diseases? As a group, they’re the leading cause of death – cardiovascular diseases, diabetes, cancer, MS, and rheumatoid arthritis.

The benefits of the “Mediterranean Diet” for heart health have made headlines, but are they effective enough for the diet to be introduced in sanatoriums? Programs for life threatening conditions cannot be hit-or-miss. With respect to effectiveness, another curative diet, the “ORS Method,” is specific and targeted; its objective being to inhibit the activity of two enzymes at the center of inflammation.

In so doing, damage that characterizes destructive cycles in chronic illnesses is minimized or averted. The biochemistry that inhibits the two enzymes does so long enough for healing phases to outpace cyclical damage on the cellular level.

Clinical work, dating back to the late 1970s, produced rather remarkable results reversing some of the most challenging conditions like diabetic foot ulcers. Clearly enough, an effective therapy can translate into bottom-line dividends for inbound medical tourism operators.
‍

Observing the Incurable Being Cured

Glimpsing into the waiting room, I routinely noted that patients rarely smiled.
‍

They were there to see cardiologist K.A. Oster, chairman of the Department of Medicine, at St. Vincent-Park City Hospital, Conn. Diabetic foot ulcer was the complaint. He was their last hope, considering that personal physicians had offered little aside from a dim prognosis: “Amputation. To prevent progressive gangrene.”
‍

Non-healing peripheral wounds, also called diabetic foot ulcers, are a complication of atherosclerosis, often accompanied by diabetes. Each year, in the United States alone, more than $25 billion is spent on treating the condition in about 6.5 million patients.

Some $4 billion is spent amputating limbs – the eventual outcome. Against the backdrop of an epidemic of epidemic chronic degenerative diseases that is plaguing America, non-healing peripheral wounds have been headlined by specialists as a “Snowballing Threat to Public Health.”
‍

Most physicians are clueless with respect to remedying the condition.
‍

During the 1980s, when I had the fortune of being a member of the Oster-Ross research team, I personally observed how several dozen patients were cured of the condition and with remarkable speed, three months, on average. In all, more than 100 patients were remedied, a result published in several, peer-review medical journals and books.
‍

Nonetheless, the therapy had two major drawbacks. It was inexpensive and it couldn’t be patented. Oster had been advised of the shortcomings by shareholders, for he was also clinical pharmacologist and medical director of McKesson Laboratories, a major wholesale, pharmaceutical manufacturer. If anyone could have gotten the therapy approved, he was in a position to do it.
‍

A Common Cause, a Common Treatment

Perhaps, the most valuable lesson learned in the treatment of “incurable” cardiovascular diseases was that much the same therapy also works for reversing multiple sclerosis (MS), gout (podagra) and psoriasis. One day, Oster shared his pet hypothesis with me, namely, that, “A multitude of apparently unrelated inflammatory diseases may actually be only one many faceted disease.”
‍

In other words, seemingly unrelated diseases, such as Alzheimer’s, cancer, and Lupus, apparently, have a common, inflammatory pathology. The nature of each condition and resulting symptoms appear to be largely determined by where inflammation starts in the human system.

During the 1980s, when I had the fortune of being a member of the Oster- Ross research team, I personally observed how several dozen patients were cured of the condition and with remarkable speed, three months, on average.

In support of Oster’s theory that chronic illnesses have a common pathology is the active participation of the same enzyme, xanthine oxidase or “XO,” for short, in each condition. During cycles of inflammation, XO generates unstable free radicals causing a chain reaction of cellular death.

Inserting XO plus the name of any major, chronic illness into a search engine reveals the impressive extent of research being done on XO. By the way, the main source of XO is homogenized cow’s milk. The human liver also produces it to digest food, but it’s about 15 less potent than XO in cow’s milk. Inflammation and XO seem to be the two bad-boy links between the diseases.
‍

Cyclical inflammation flare-ups in chronic illnesses are like a trick, birthday candle that relights after you blow it out. It’s the low-temperature-burning magnesium flakes in the wick that allow the candle to relight. In chronic diseases, XO is an irritant that has taken up residence where it shouldn’t be found.

It “relights” inflammation, over and over again, under certain conditions. The key, then, is to eliminate those conditions. It’s something that can be accomplished by way of diet.
‍

The ORS Method applies theory to practice – the natural extension of the folic acid therapy that we implemented with great success more than 30 years ago. It’s a nutritional plan that introduces correctives through proper food selection.

Dressing Up for Dinner

The choice should be simple enough.
‍

Either therapy can be as dreary as the color of hospital walls or it can be implemented with flair by going on vacation in 5-star luxury at a fraction of the cost.
‍

Again, results are what count most.
‍

Open heart surgery has an unpredictable outcome and will cost no small amount of pocket change. It may or it may not alleviate symptoms and it certainly doesn’t cure or address the heart of the problem. It’s a matter of time, 2-15 years, before bypass surgery will be rescheduled for round 2.
‍

For most persons diagnosed with a chronic degenerative disease, it comes down to hoping against hope and risking it through the medical minefield of some rather grim statistics. Therapy that is the subject of the present article means learning about the condition, tripping the light fantastic and restoring zest and well-being with gourmet flair. All factors considered, bypassing the bypass seems to be the intelligent choice.
‍

After a guest arrives at a hotel or a sanatorium and the original diagnosis is recorded by an attending physician, a comprehensive questionnaire is filled out to assess the ideal, nutritional solution for each person. The core of the individualized, therapy program consists of dressing up for dinner and enjoying tasty menus for 1-4 weeks.

Education is ongoing during the stay, considering that the follow-up required after returning home, especially for reversing more serious conditions, may require 2-6 months. Some nutritional guidelines are to be adhered to, forever. In any event, the approach allows each person to take control of his or her health in a dignified and civilized way.
‍

In contrast to draconian diets that cut out fats, cholesterol, carbohydrates, alcohol and protein leaving a symbolic vegetable to look at, ORS Method dinner plate offerings compete with savory choices from the best of French cuisine.

Let it be recalled that the French consume three times more cholesterol and fat than Americans yet have five times less heart disease. The observation has been referred to by researchers as the “French paradox,” yet it is easily explained on the basis of findings determined by the Oster-Ross team.

A well-documented article in Wikipedia, “Homogenized Milk and Atherosclerosis,” covers the subject and the connection between “XO, cholesterol and fats.”
‍

The best of curative diets that might be offered in a sanatorium, today, lacks the fine-tuning and targeted recommendations characterizing the ORS Method. Fad diet plans promoted by publishers also lack the background science and are often counterproductive. Decision-makers at sanatoriums and health retreats interested in learning more about the ORS Method may send inquires to the coordinates, below.
‍

Nothing forbids the ORS Method from being introduced in health retreats in the United States as long as promotional claims aren’t made that it cures a health condition. It might present a marketing challenge considering that the method is designed specifically for remedying an illness, but the challenge is not insurmountable.

Clearly enough, overseas venues don’t risk a possible, head-on clash with the economic interests that rule the medical, food and pharmaceutical industries in the United States. History is replete with examples of innovative ideas and businesses being compromised by malevolent motives. The therapy is too effective and inexpensive for it not to draw attention.
‍

I’ve chosen to work alongside a few, select sanatoriums in Yalta, Crimea, which is quiet, abounding with charm and rich in tradition. In fact, it’s the birthplace of modern medical tourism, with Russian aristocracy voyaging there since the 1800s.

International flight connections are through Simferopol and Kiev and no visa is required for Americans and Europeans. It’s like the French Riviera, in terms of climate, with the edge to Crimea, in terms of unspoiled nature.
‍

With the ORS Method in the arsenal of marketing divisions at spas, hotels and sanatoriums, benefits that can be expected include:

Unfortunately, I discovered that atherosclerosis and Alzheimer’s are the same inflammatory disease, but in different locales too late to help my ailing mother. With her passing, the desire to share information about how chronic illnesses can be remedied has become a mission as much as a way of life.

Protégé of cardiologist K.A. Oster and professor D.J. Ross, Nicholas Sampsidis is an authority on chronic, inflammatory, degenerative diseases and a pioneer in their treatment. Author of the best-selling title, “Homogenized Milk & Atherosclerosis,” of which nearly one million copies are in print, he has updated the information and backed it with more than 100 new references in a new edition (eBook format). In his latest title, “Something Called XO,” Sampsidis expands on the hypothesis of Oster and Ross that many apparently different diseases are actually one many faceted manifestation of the same disease. Applying more than 40 years of research to practice, Sampsidis has formulated a unique, nutritional solution for preventing and reversing chronic degenerative diseases – the ORS Method. A graduate of Bowdoin College, Sampsidis provides advisory support to health centers and sanatoriums interested in implementing the therapy. nsampsidis@treat-heart-disease.org
nsampsidis@hotmail.com
+380 096 881 5961 • +380 066 844 0192