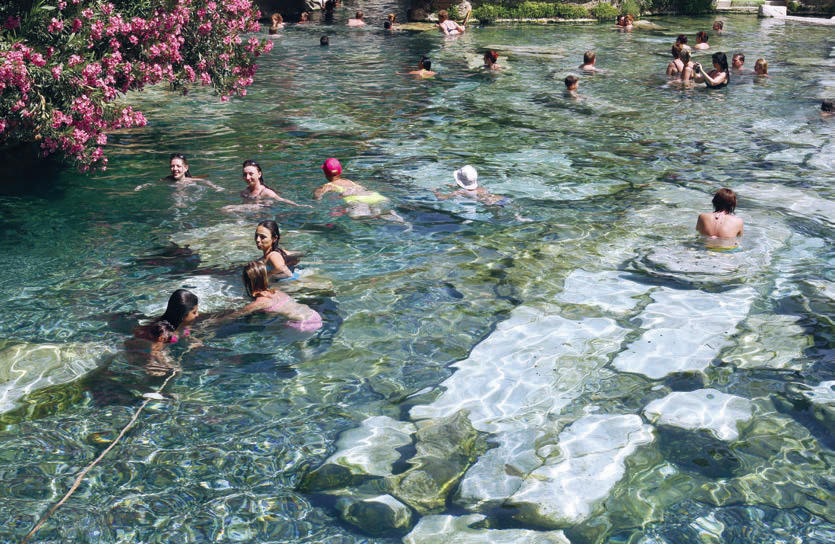 As an auxiliary element of medical treatment and a wellness therapy, thermal treatments have been a significant option for centuries. Nostalgic auxiliary treatments combined with comfortable facilities and modern-day professionalism are popular with people everywhere. Ancient age’s healing hot spring water therapy evolved into contemporary-designed thermal resorts and spa centers. Turkey, with its long history of excellent thermal water resources, is leading the Renaissance of thermal therapy, providing sophisticated services that promote the wonders of healing hot springs.

The healing effect of hot spring water has been utilized by many cultures for centuries. For ages, people took advantage of thermal centers for health. Various minerals in hot spring water solve different kinds of health problems and provide significant help in medical treatment. Indeed, many years ago, Romans knew very well that water is not just for washing, cleaning and drinking.
‍

The word “spa” is from the Latin sanus per aquam – “health through water,” a motto Greeks and then Romans took to heart with refined and impressive thermal facilities. Public bath houses were meant for relaxation, regeneration and healing.
‍

They were also an important center of social life, although for men only. Women and slaves were forbidden in bath houses.

For a small entrance fee, recreation-seeking Romans could relax in these beautiful and rather large facilities that could accommodate up to 1,000 visitors.
‍

The first thermal facilities were heated by large braziers, but air heating — invented almost 2,000 years ago — used a system of holes in walls and floors to produce hot air, which produced steam and increased temperatures in the room and bath by up to 55°C. But, the water had not always been artificially heated; in some famous places hot springs were directly bubbling from the earth. They are still used for spa and thermal resorts, but with a modern touch.
‍

To date, not much has changed from the way Romans thought of spas. Thermal pool and bath cures have become very popular because hot springs now have far more to offer than relaxation and recreation: many of the thermal waters are officially recognized as medicinal waters, the healing effect of which is used for therapeutic purposes.
‍

In some countries, there is a strict distinction between mineral and curative water. So mineral water, like drinking water, is considered a beverage and is treated as such.
‍

However, curative water is regarded as a medical product and is subjected to rigorous testing by healthcare authorities.
‍

The curative, palliative or preventive effect of thermal water must be scientifically proven beyond doubt before it may be called healing or curative water. It is rarely considered fact that thermal water had once been rainwater that seeped through the Earth’s permeable rock layers and was warmed due to the increasing proximity to the hot interior of the Earth.

When water temperature reaches 20°C, it is called thermal water which, on the way into the depths of the Earth also accumulates trace-elements and minerals, such as sodium chloride, carbon dioxide, sulfur, iodine, calcium, iron, magnesium, potassium and fluorine, and is, thus, considered mineral thermal water.
‍

Thermal waters and baths often vary in both levels of temperature and in mineral constituents of water. Alleviating carbonic acid baths, with rich content of carbon dioxide, are used for hypertension and cardiovascular ailments and significantly improve blood circulation.

The malodorous sulfuric thermal waters are applied for skin diseases, such as psoriasis, eczema and acne or for various rheumatic complaints. The brine baths with their high salt content are often used against rheumatism and musculoskeletal pain.
‍

Thermal cure is a method by means of therapeutic agents applied in a series at regular intervals in certain doses, repeated at certain a rate. Hot spring treatment is a system applied by means of ground and sea-borne mineral waters, gases, peliod (mud) and climatic factors as well as the natural therapeutic elements created within local facilities.
‍

Roman Baths Transformed: Turkish Thermals Turkey, as the cradle of civilizations including the Hittite, Roman, Byzantium and Ottoman empires, has been a health center for all cultures because of rich hot springs and thermal resources. Turkey is considered the largest and among the top three nations for resort spas and wellness applications and facilities in Europe.
‍

With various location options in different regions of Turkey, thermal treatment can be combined with a holiday at nearby resorts. Thermal tourism areas in Turkey are (for region references, see the figure below):

There are more than 1,300 thermal water sources in Turkey, the temperature of which varies between 20°C and 110°C, and the flow rates of which vary between 2–500 lt/second.

Thermal spa therapy or thermal medicine is applicable in the treatment of rheumatic diseases including digestive system,

liver and gallbladder diseases, metabolic obesity, gout, kidney and ureter diseases, skin diseases, conditions arising from orthopedic surgeries, gynecologic diseases and all types of convalescence-associated diseases. Thermal water can be applied not only externally, but in treatment techniques, such as inhalation and steam rooms.

Excellent healthcare infrastructure, relatively short flying times from North America, Europe and Middle East and lower prices from country of origin attract an increased volume of medical tourists to Turkey. According to the Turkish Ministry of Health, 300,000 tourists visited Turkey, in 2013, for medical travel.3

The ministry hopes t to increase this number to 2 million by 2023 with the aid of new reforms in the healthcare system. Thermal tourism is one of the most promising branches of the medical travel industry in Turkey thanks to the potential to combine healthcare with leisure.
‍

Natural resources and clean facilities enable health tourists to enjoy thermal treatment in Turkey. Travelers seeking thermal therapy in Turkey will find similar advantages as those offered around the world, but in a historical setting. Hierapolis, also known as Holy City and located within Turkish borders in southwestern Anatolia, is popular for hot springs and thermal pools. It is ranked as one of the most beautiful destinations in the world on the UNESCO World Heritage List.
‍