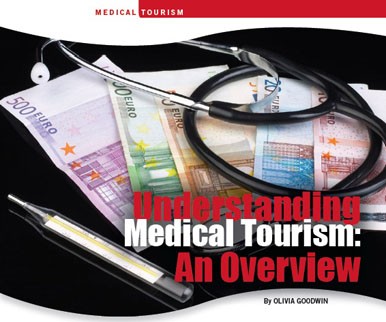 Medical Tourism: When patients travel domestically or internationally to have a surgery or procedure. They travel for better quality, affordability and some procedures are only available in certain countries; depending on the patients’ needs. Traveling for medical care is becoming an international trend, understanding medical tourism nowadays is a must.

Mentioning medical tourism attracts a lot of questions and bias’ it can often be associated with going to another country and having a procedure botched. Attempting the unknown can be scary to some; and beings this topic hasn’t been widely discussed the majority of people only have tidbits of information to base this off of.

Once patients and companies educate themselves they may see that it is a legitimate and sometimes better option; and are more willing to consider it. Some also have the opinion that the U.S. is the best place to receive healthcare, while that can be true in some cases; it has been proven to be worth the time to look into other options.

The quality of care is a question many have when looking into this. Many of the physicians practicing abroad have trained in the U.S. and have earned U.S. Board Certification. Some countries or states have a lower patient to nurse ratio, equal or superior facilities and equipment. Further research into medical tourism will also show that some insurance companies have implemented the option to travel for medical care.

Studies conducted by the Medical Tourism  Association TM have shown that companies can save up to 90% in some cases by the patient choosing to have a procedure done in another country. Some companies that have offered this as an option have also offered cash incentives or covered travel expenses for the patient and companion; even covering those expenses and the procedure it is still a huge savings.
‍

THE MARKET FOR MEDICAL TOURISM

While some insurance companies have jumped on board with medical tourism the uninsured is still a major market for this. According to the U.S. Census Bureau there are more than 50 million Americans that do not have health insurance; this number is said to rise with the increasing cost of health insurance.

This is a large number of patients that could choose to leave the U.S. for healthcare and when savings and quality prove to be significant; it’s an option many will take. The under-insured makes up a part of this market as well. While they do have insurance; it isn’t always enough to cover their needs in full. Dental insurance typically covers the basic preventative dental care such as cleanings and treatment of cavities; those that seek more major dental care such as implants will not be covered.

In 2000 The U.S. Administration on Aging found that there were 35 million 65 year olds; and that number has and will continue to increase; making the need for dental implants and surgery a booming industry. Back to the insured; ethnic employees are an untapped market for this industry.

The thought of going to another country for a surgery can be scary to some people; language barriers, cleanliness, safety etc, but for ethnic Americans it can be preferable. They already speak the language, they don’t have to overcome fears of safety and cleanliness and it would be an opportunity for them to visit extended family and recover in their home country.

In 2008 Deloitte Centers for Health Solutions conducted a survey Medical Tourism: Consumers in Search of Value; this survey showed that in 2007 an estimated 750,000 Americans traveled abroad for medical care. They estimated that this number would increase to six million by 2010.
‍

People have been traveling for medical care for years, it’s just in the past few years it’s becoming a more and more well known option. Some high profile patients have been featured in the news drawing more attention to the industry.

Actress, Farrah Fawcett had a very public struggle with cancer and traveled to Germany to receive treatments not available in the U.S., this was covered in a two hour televised cancer journal. More recently, the L.A.

Lakers super star Kobe Bryant traveled to Germany to get platelet-rich plasma therapy in hopes of repairing his injured knee, reported the L.A. Times. According to the Orthohealing Center PRP therapy offers a possible solution to accelerate healing of tendon injuries and osteoarthritis naturally.

This therapy will merge cutting edge technology with the body’s natural ability to heal itself. Blood is made of red and white blood cells, plasma, and platelets. A small amount of blood is drawn and spun in a centrifuge to isolate platelets then are guided by an ultrasound and injected into the injured area to try to stimulate the tissue repair.

Beings this is a relatively new procedure, more studies need to be conducted to prove its effectiveness. Golfer, Tiger Woods and tennis pro Rafael Nadal are among other athletes that have tried this therapy.
‍

Medical tourism is already a huge industry and it hasn’t even hit every home in America or abroad, yet. Some countries are developing healthcare clusters made up of hospitals, governments and tourism boards and are really starting to market their country as a destination for healthcare.

This has also become a new market for travel agents. Given the state of the economy research has shown that people are not leisurely traveling as much as they use to, traveling for medical care combined with tourism is a new option for them to promote.

Instead of planning just a trip for fun, organizing the hospital and aftercare would be the extra things to consider. Leaving home for medical treatment is not for everyone, being educated on the details of this industry is the first step in considering it.
‍

Studies conducted by the Medical Tourism Association TM have shown that companies can save up to 90% in some cases by the patient choosing to have a procedure done in another country.
‍

Olivia Goodwin serves as Communications Coordinator and Assistant Editor for the Medical Tourism AssociationTM and Magazine. She travels around networking and developing ideas for the Magazine and the Association. Olivia holds a degree in Multimedia Journalism from Florida Atlantic University.
She may be reached at Olivia@MedicalTourismAssociation.com