Up in Smoke: Public Employees Fear Loss of Health Benefits 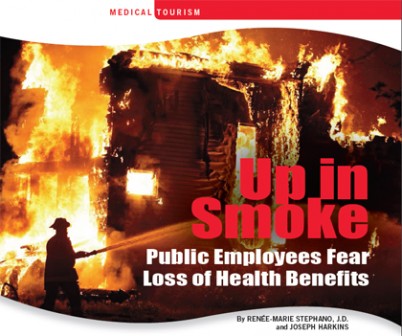 What a drag it’s been getting old for some public employees. Once promised a lifetime of healthcare benefits, a generation of city workers waits on edge listening to songs and dances from government officials who weigh both their futures in federal bankruptcy court.

Detroit leaders desperate to cut into the city’s $5.7 billion in healthcare coverage owed to retirees are thinking about dumping a portion of those costs onto Uncle Sam. The thought is to push retirees into Obamacare insurance exchanges where uninsured Americans can enroll for healthcare coverage.
‍

The question then begs: Who pays for affordable care when it is unaffordable to so many? The federal government is an unenviable source because its unfunded Medicare and Medicaid obligations for the next 75 years add up to $58 trillion, according to the Heritage Foundation. Those figures were before Obamacare, which adds another $17 trillion in unfunded liabilities.
‍

Detroit can’t pay. The Motor City is bankrupt, $19 billion in debt, about half of which stems from health benefits and pensions the city had promised, but can no longer afford to pay in full. Instead, Detroit leaders want to move retirees off city coffers and put the burden of paying their healthcare costs on the federal government and taxpayers who subsidize the insurance markets established under the Affordable Care Act.
‍

The city currently pays for the coverage of retirees under 65 who are not yet eligible for Medicare, but habitually egress from work after about 25 years of service to either take on other jobs or continue to remain in the public sector as contractors or consultants without jeopardizing benefits.
‍

According to The New York Times, proposals similar to Detroit’s in other cash-strapped cities like Chicago; Sheboygan.
‍

The question then begs: Who pays for affordable care when it is unaffordable to so many?
‍

County, Wisc.; and Stockton, Calif.; could also shift retirees into the new insurance exchanges. Other cities — some not even financially distressed — are contemplating doing the same thing. These controversial plans assume the exchanges and the rest of the healthcare reform legislation will launch as scheduled at the beginning of 2014. Meanwhile, fearful city workers contemplate their options.
‍

“Patients used to be able to rely on their pensions for healthcare coverage,” said Jonathan Edelheit, president of the Healthcare Reform Center & Policy Institute and CEO of the Medical Tourism Association®. “Those days, unfortunately, are probably over. But, retirees who suddenly find themselves uninsured still need medical care. They just can’t often afford their care domestically.”
‍

Edelheit says some of these baby boomers will choose medical tourism opportunities, where they will travel abroad to top-notch facilities and clinics that offer healthcare at a fraction of the cost of similar procedures and treatments available from their community physicians.
‍

The first thought for many ailing Americans with reduced pockets, especially those in border cities like Detroit, might be to head north in the hope of acquiring much-needed healthcare. But, establishing residency in Canada is not a simple achievement for U.S. citizens who choose to make the move in the name of good health.
‍

Like Detroit, medical bills can completely overwhelm a family when illness strikes, an unfortunate concern Americans can certainly bank on.
‍

Only legal residents qualify for free medical care in Canada, using plastic health cards for identification. Others are supposed to pay for medical services they may require, but many are submitting counterfeit or borrowed cards. Loopholes and the lack of stringent controls have cost the provincial health care system in Ontario as much as $691 million a year.
‍

Instead of running into honest dead-ends through their local avenues, patients are finding that savings overseas can be dramatic enough to compensate for travel costs and even out-of- pocket insurance premiums.
‍

Families have already witnessed health insurance premiums grow by 97 percent in their employer-sponsored coverage programs and at the expense of Medicare, which has watched enrollment from aging populations swell, thereby draining state and federal budgets.
‍

Like Detroit, medical bills can completely overwhelm a family when illness strikes, an unfortunate concern Americans can certainly bank on. In fact, escalating medical bills are expected to push 1.7 million households into bankruptcy this year, making health expenses the single biggest cause of default filings, outpacing credit-card debt or unpaid mortgages.
‍

The findings are from NerdWallet Health, a division of the price-comparison website, which analyzed data from the U.S. Census, Centers for Disease Control, the federal court system and the Commonwealth Fund, a private foundation that promotes access, quality and efficiency in the healthcare system.
‍

Threats of financial delinquency have prompted about 2.5 million Americans to think-twice and decide not to take medications they cannot afford as a short-term fix that, most often, triggers more expensive visits to the emergency room down the road.
‍

Smiles for the Aged

Adults ages 50 to 64 are also not foreign to rising out-of- pocket healthcare costs and declining access to health insurance. Dental care poses both aesthetic and practical healthcare problems that should be foremost on the minds of seniors.

Advancing age puts many at-risk for tooth decay, which remains the most prevalent chronic disease among adults 55 and over and a primary reason seniors consider traveling abroad to compensate for procedures that are not covered by insurance.
‍

An international destination does not necessarily have to mean distant travel. Mexico tourism officials estimate about 450,000 people visit their state of Baja California each year for medical tourism procedures – from dental work to extensive surgeries. What’s more, Mexican tourism officials say the patients are worth some $89 million in U.S. dollars per year to the state.
‍

In many Mexico towns, American tourists bring smiles. In Los Algodones, smiles bring tourists. Almost 99 percent of the patients that visit the Sani Dental Group in Los Algondones, a small town on the extreme northeastern tip of the municipality of Mexicali — or about 20 miles west of Yuma, Ariz. – are residents of the United States or Canada.
‍

If crossing the border for root canal or dental implants sounds painful, then the cost savings of up to 70 percent compared to those in the United States for similar procedures and treatments must be easier to swallow. Then, it’s not such a strange trip after all, especially for the estimated 120 million Americans who do not have dental insurance and can’t expect coverage under the new healthcare reform laws, either.
‍

Beginning in 2014 when adults will be required to purchase health insurance under the new legislation, these same Americans will not be mandated to purchase other types of policies like dental or vision.
‍

For some seniors who might consider a border crossing for medical treatment including dental or eye care to be out of their comfort zone, the choice for domestic travel is easier. If this practice continues, consumers shopping for the best bargains for their healthcare dollars may soon make domestic tourism for medical procedures and treatments as American as apple pie.
‍

Flying halfway around the world – to, say, Thailand or Costa Rica — may not always be necessary to save money. At the prospect of losing patients to foreign markets, hospitals at home have begun to match prices.
‍

The Medical Tourism Association®, which supports awareness initiatives through educational and certification programs and partnership and networking opportunities, has been urging employers interested in controlling healthcare costs and improving outcomes to also consider domestic travel.
‍

Because the savings can be so profound, some employers have been actually willing to sweeten the pot for their employees by offering incentives including no-out-of-pockets costs, money for travel expenses and services that make trip arrangements.
‍

Taking a cue from medical tourism, which offers affordable care around the globe, U.S. employers are finding sweet deals for their workers and dependents within the nation’s borders to offset the bitter costs of healthcare in their neighborhood communities.
‍

From hip and knee replacements to cardiac bypasses, employers are looking at domestic medical tourism to map out ways to manage their benefits costs with avenues that provide employees with access to attractive rates and quality care.
‍

Domestic medical tourism is one way for both employers and their covered workers and dependents to bend the cost curve. Hospital care accounts for more than one-third of the nation’s healthcare spending tab. Employers with domestic travel programs save money by negotiating a single rate with hospitals, which includes fees for surgeons, anesthesiologists and all medical care up until a patient is discharged.
‍

Domestic medical tourism is also moving beyond complex procedures and organ transplants to offer relatively minor treatments, all in the name of targeting the best bang for the healthcare buck.