What the U.S. Can Learn from Other Nations Healthcare System 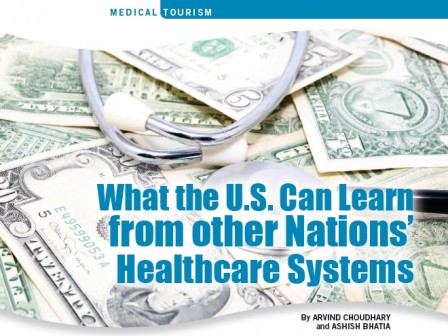 Martin Luther King Jr. stated in one of his speeches, “Of all the forms of inequality, injustice in healthcare is the most shocking and inhumane.” Most of other developed nation’s healthcare system covers all its citizens, the U.S. system, which leaves almost 15 percent of the population without health insurance, is the most unfair. The key difference is that foreign health insurance plans exist only to pay people’s medical bills, not to make a profit. The United States is the only developed country that lets insurance companies profit from basic health coverage. In terms of finance, U.S. healthcare’s towering expenses force 700,000 Americans into bankruptcy each year because of medical bills. The U.S. ends up spending 16 percent of its GDP on healthcare and results are a far cry from being even satisfactory. Any healthcare system cannot be called the best unless it provides good care to all at a reasonable cost.

Behold the American healthcare system. The United States does have some of the best medical technology, best medical research, and best-trained doctors in the world. Most Americans, even those critical of the healthcare system as a whole, report that they are satisfied with the care they personally receive.

America produces most of the world’s prescription drugs and Nobel laureates in medicine. Technological innovation is a hallmark of U.S. medicine. Anyone in the United States with adequate insurance or the ability to pay has access to the latest clinically effective technology with little or no waiting time. It also attracts patients from around the world in search of the best treatments money can buy.
‍

So, does that mean the United States has the best healthcare system in the world?
‍

Although many individuals in the United States receive exemplary healthcare, international comparisons on most key indicators of the public’s health have shown that the United States has poorer health outcomes in the aggregate than many other industrialized countries.

The United States of America is number one in obesity, 37 in infant mortality rate, and tied at 54 with Fiji for fairness in healthcare. Other wealthy nations like Japan, Australia, Canada, and rich European nations spend between 8 to 11 percent of their GDP on healthcare compared to 16 percent in U.S. and enjoy superior service and universal coverage.
‍

There are some inherent practices and factors which make U.S. healthcare the way it is today.
‍

Then, there are issues like ineffective checks on overutilization of health technologies and less penetration of EMR. Physicians, hospitals, and patients are free to order or utilize healthcare technology regardless of whether it is clinically effective or cost-effective.

The United States lags seriously in the implementation of EMR systems in office practice. Compared with primary care doctors in other countries, U.S. physicians are among the least likely to have extensive clinical information systems.
‍

The fundamental premise of solving the American healthcare crisis is that most American decision makers are in a state of denial. Many of them consistently claim that the United States has the greatest healthcare system in the world and they vehemently rule out the options as socialized medicine; the solution lies not in changing the entire way of functioning rather just taking good things from whichever countries the U.S. can.

To start with, the quality and accessibility of healthcare in the United States could be improved by adopting reimbursement programs like those in other countries that provide substantial rewards based on performance on quality metrics and care coordination rather than solely on the volume of services provided.

Experts offer numerous theories as possible solutions. One that appears to be gaining support is a single-payer system, a universal form of government-provided healthcare, similar to Canada and certain Western European nations.

Advocates of this approach believe it will resolve the problems of cost, access and fairness. Other solutions include expanding Medicare to the entire population. Some favor price controls and imposing strict budgets. Others believe that free market competition is the way to go.
‍

A common thread exists among the popular solutions offered: to create a better healthcare system. No single silver bullet will transform the U.S. healthcare system, but a series of coordinated policy changes has the potential to substantially bend the curve of projected healthcare spending.

Making the U.S. healthcare system work better will require multiple, well coordinated reforms across a broad front, including many areas that the PPACA does not even attempt to come to grips with.
‍

Arvind Choudhary has over five years of experience in Healthcare IT field and works with one of the leading U.S. healthcare company. He works primarily on social media, CDHP, and smart applications for healthcare. He can be contacted at: arv.choudhary@gmail.com

Ashish Bhatia has over 16 years of experience in IT and works as Senior Delivery Manager with one of the leading U.S. healthcare company. He can be contacted at: b_aashish@yahoo.com