Home
/
Difficulties in Australian Healthcare May Present a New Opportunity 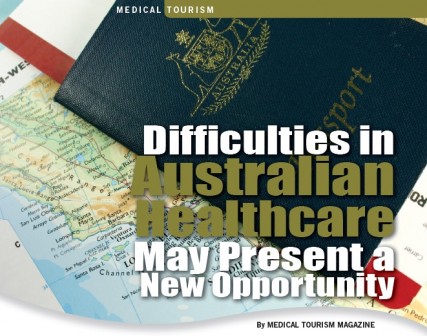 Difficulties in Australian Healthcare May Present a New Opportunity

In the idyllic north of Thailand, close to the city of Chiang Mai near the border of Burma, is a small drug rehabilitation clinic known as “The Cabin.” Over the past year the clinic has become increasingly popular with Australians who are seeking to overcome their addictions. Of the 240 people who come here annually a third of them are Australian natives, or big name celebrities. Recently Peter Doherty, a British musician and co-frontman of the band The Libertines arrived to The Cabin to try and kick his heroin and cocaine addictions. Among the activities he will take part in are Elephant riding, yoga, cognitive behavioral therapy, and the 12-step program. The clinic acts as much as a resort as is does a drug rehabilitation clinic. This clinic is preferred not just for the picturesque scenery, but because of its remoteness. Many celebrities and other high profile figures can come here and remain anonymous without fear of the relentless eyes of the paparazzi.

This is all part of a growing trend of Australians taking their medical needs beyond their own borders. Thousands of Australians visit the Philippines for dentistry work such as crowns, veneers, cosmetic dental makeovers, and dental implants.

They come here to enjoy the beautiful beaches and scenery, and to take in the exotic food; all while receiving great dental work from anywhere between 40 percent to75 percent of the price they would pay in Australia. Having crown work done in the Philippines costs around $300-$400 (Aus.).

Cosmetic dental surgery and exotic rehab/resorts are a small piece of the potential Australians play in the future of medical tourism. By the year 2020, 18.3 percent of the population of Australia will be over the age of 65. The Australian public healthcare system, known as Medicare, is loved by many Australians but does not cover all the procedures the elderly might need such as dentistry, hearing aids, vision, and cosmetic surgery.

The number of Australians leaving to meet their dental needs, as mentioned above, is growing for obvious reasons. It becomes clear that to those who are trying to start a medical tourism industry in their home nation, or to expand an existing one, a new market is opening up for elderly Australians who will need hearing aids or corrective eye surgery, procedures which are not covered by Medicare.

They must either pay out of pocket the high prices domestically, or go to another country to get it done at a lower cost, while taking in the sights of another nation they have always wanted to visit.
‍

This emerging Australian market does not consist entirely of the elderly or of the rich seeking an exotic retreat; it is also made up of the sick that have little where else to go. Some of the cutting-edge medical technology is simply not present in Australia, or it is not approved by the Therapeutic Goods Administration (TGA).

The TGA is a regulatory body which approves medical procedures, treatments, and devices both produced domestically or imported from another nation. The TGA serves under the Department of Health and Ageing (DoHA).

The Australian government recognizes that, sadly, sometimes Australian medical facilities do not have the equipment needed for rarer diseases or do not have the most advanced forms of treatment, so in order to counter this, they have established the Medical Treatment Overseas (MTO) Program.

The MTO Program has saved many lives including that of five-year- old Audrey Anderson, who was sent to the United States to undergo a new form of treatment for brain cancer called Proton Therapy, which is safer than traditional radiation therapy.
‍

The MTO Program is regulated by strict guidelines; the treatment in question must not be available in Australia “in time to benefit the applicant,” has to be “significantly life-extending and potentially curative”, there must be a “real prospect of success,” and must be “accepted by the Australian medical profession as a standard form of treatment for the applicant’s condition.”

Though these guidelines may seem obtrusive, and severely constricting, the market is still there for patients from Australia who have no alternative but to leave their country to seek the medical help they severely need. This may be a small niche, but an immensely important one for the people whose lives are at risk without it.

If the conditions are met, then the Australian government will provide the financial support needed for these procedures to be done, so for people seeking to move into this sector of medical tourism need not do it for purely altruistic purposes.
‍

The potential for medical tourists from Australia will continue to grow over the years. It could come from the poor elderly who cannot afford the hearing aid they need or the eye surgery to make their lives easier, it could be the five- year- old girl who needs a procedure not available in Sydney, or it could even be the wealthy celebrity looking for a quiet retreat to get clean.

These are just some of the examples of the potential markets for medical tourists from Australia. The Australian Pharmaceutical Benefits Scheme (PBS), which subsidizes prescription drugs, is growing very large very quickly.

This growth coupled with the growth of the need for Medicare will put major pressure on the government to fix the issues or to find alternative solutions.  Until then Australians may be leaving their home to seek the care that they need.