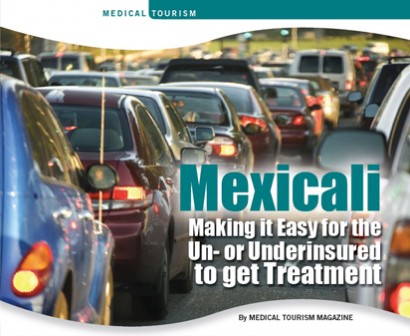 Mexicali has the location, physicians, pricing and now designated vans and medical tourism lanes from Mexico to Las Vegas in order to simplify the 5-7 hour trip for cross border patients. They have figured it out. Unfortunately, this type of deal wouldn’t work for all countries trying to attract medical tourists, but it is certainly an innovative approach to capitalizing on a market in need.

What is Mexicali doing to attract patients?

Like everywhere else the U.S. economic crisis is affecting healthcare in Nevada. Even though the quality is there, the un- and underinsured are not able to pay U.S. prices for healthcare. For example one patient said that the last teeth cleaning she had in Las Vegas cost $350, and the dentist she plans to see in Mexico only charges $70.

The location and price is right, so for those with little to no health insurance this makes sense. It makes even more sense when the trip its self is figured out for you. The hassle of travel and finding the right medical facility is half of the battle.

So Mexicali decided to do something about this. In an article by Fronteras Desk, Omar Dipp, the city’s tourism director said that the Mexicali area earned around $16 million from medical tourism in 2010, and his office is trying to increase that by 50 percent in the next year.

They are trying to attract tourists from the Southwest, such as Coachella Valley, Phoenix, and Vegas. Dipp also noted that Vegas has a big Latino community, and the majority of medical tourists to Mexicali are Latino.
‍

The article in Fronteras Desk covered the story of four residents of Nevada that utilized Mexicali’s medical tourism service to seek treatment in a country that is a mere seven hour drive away. Either by word of mouth or on the radio a small group of strangers all in need of medical care  heard about a van service that will take you from Las Vegas to Mexicali for $30 (round trip) for prearranged doctors and dentist visits.

This new monthly van service is subsidized by the Mexicali tourism board and a volunteer from Las Vegas and Mexicali native coordinates these trips. This trip is short enough to make, but long enough to have to spend the night, even if you are just going for a quick diagnosis. The hotel is coordinated by this service as well.
‍

“The main objective is attracting more tourists, who will come and take care of their medical needs and make their experience down here more likeable and then make you stay a little bit longer,” Dipp said in the article by Fronteras Desk.
‍

A 62-year old uninsured patient that made this trip was traveling to get a diagnosis because he could not see out of one of his eyes. The doctor he saw diagnosed him with cataracts, so he made plans to return in a few weeks to have the surgery done with the same doctor, which will require him to stay in Mexicali for a few days.
‍

Dipp said that is the exact reason he is investing in the van. “We understand that even if these patients just came for a small consult, eventually they will be coming back on their own.”
‍

In addition to simplifying travel for patients seeking a diagnosis or quick procedure, the way home from Mexicali will be quicker than the way there due to a new designated lane for medical tourists at the border. As of April 30, 2012 medical tourists from the U.S. with the right documents are able to skip the long lines on the Mexican side of the border.

Foreign patients will need to request a pass from Mexican doctors that are participating in the program. The pass, a doctor’s receipt and foreign license plates will allow patients to bypass the traffic and cut to nearly the front of the line, saving them around two hours.

‍
The lane is modeled from an established tourism lane at the San Ysidro Port of Entry linking Tijuana and San Diego. Due to reported abuse when that lane opened, this lane requires the participating doctors to sign a contract with the tourism board to ensure they only give passes to foreign patients and each pas will cost around $4.
‍

The challenge for Mexicali to attract more Americans is that for years there has been so much hype in the news about Mexico being a dangerous country and the medical facilities are not to be trusted. Dipp and his office are trying to spread the word that Mexicali is in fact safe and they have high quality medical facilities.

They have created brochures showing modern private hospitals with English speaking staff, they go to healthcare conferences and they have created a directory of certified doctors, dentists and surgeons in the Mexicali area so foreign patients will be able to make an educated decision.

‍
Mexicali has discovered what will work for them in attracting patients, their initiatives are still in beginning phases but they are hoping to increase the patient flow by 50 percent. With populated hospitals and patients needing to stay for more than a day it will also increase revenues for the hotel, restaurant and tourism industries.